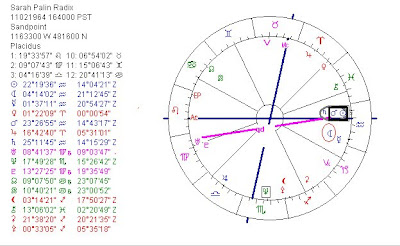 On August 30 I wrote about Sarah Palin and her chart (time unknown). Now I found Sarah Palin's birth time noted as 4:40 p.m. on http://planetwaves.net, with source 'Starlight news'. Should that be her chart, really? Let us take the Starlight's word for it and give it a try. At least this chart shows the leader. She has an angular Sun and Saturn for the crucial influence of leadership and ambition in her life. That Saturn is opposition Obama's Uranus! The controversy between conservatives (Saturn) and democrats (Uranus) in a nut shell...

SARAH PALIN's NATAL CHART 16:40 hours
A Leo Ascendant and the Sun conjunct Descendant (with Mars and Saturn); Neptune is on a crucial spot, square Ascendant (and Sun).
Jupiter is not making aspects in sign or orb 5 degrees. Jupiter is ruler 5 in 9 and that is a fortunate combination of the houses of luck and success with the planet of progress. The Moon is oriental in the 6th house. Noel Tyl in Vocations: QUOTE "This individual needs to work all the time' and 'Very often: work for public improvement'. And the oriental Moon should often give the need to preach! So that fits. And there are a lot of capabilities shown in her chart. We see Sun, Moon, Jupiter and Neptune with Mars and Saturn as prominent planets. That is 60%!

The importance of NEPTUNE in her chart
Neptune is the symbol of all the immaterial and amorphous, like for example religion. See the influence of Neptune in her natal and transits:

1. Now that I write this, transit Neptune is exactly conjunct her Sun. 2. Transit Neptune is semi square progressed Sun and square progressed Venus.
3. Neptune is square Ascendant and Sun
4. Her Neptune is exactly conjunct the McCain 11:00 a.m. chart!
5. Neptune is still square her Sun, but the aspect is waning, on November 4, 2008.
6. Her solar return for this year has Pluto on the MC, Sun conjunct Neptune...
7. Her MC semi square Jupiter/Neptune and Jupiter inconjunct Neptune tell us about fans, followers, idolizing and the religious conviction influencing her career.

What is the meaning of all that Neptune? Is she the 'spitting image' of the mean conservative in person, I wonder? Her Neptune conjunct the Ascendant of McCain and on top of the chart of Obama makes me think that she influences both of them. I am curious to read what others may think of that! Comments are welcome. And of course we will see it in November...My first impression, that Sun-Neptune-people are likely to be underestimated (just like Obama and Merkel have been), seems to have been right. . Cafe-astrology might be to the point about hard aspects with Neptune and the 'glamour' in their world. It seems an ordinary living is not enough, when you have a Sun square Neptune. Many actors have a connection between Sun and Neptune. They are those actors who are identified as the person they impersonate in the movie. They experience that it is difficult to be seen as they are, as they have become 'their role' in the public's eye. Is what we see, what we will get?
Both Obama and Palin seem to have come up out of the blue, in both cases religion is an item and both images are a creation of the media (Neptune). And that is a creator able to destroy an imago, too. Palin will have to deal with the media for some months, since transit Neptune is square her Sun, eluding the subject of living with discretion and secrets, and the will to be more than a usual person, right now.

QUINDECILES FOR OBSESSION AND DEVOTION
Quindecile aspects are made between Mercury-Jupiter, Sun-MC .and Moon-Ascendant (75, 105 degrees, with 1,5 degrees of orb) and Mars-Uranus, Saturn-Uranus and Sun-Uranus (165 degrees with 2,5 degrees of orb). Three 165 d quindeciles are pointing at intensity in whatever she does. And they are pointing at Sun, Mars, Saturn, Uranus for a reason. Saturn and Uranus are on either side of her progressed horizon on Election Day*), not conjunct, but close and getting stronger.

PLUTO
This year must be a difficult and exhausting one for Sarah Palin, who does not seem to be exhausted at all! She gave birth to a child with Down syndrome that needs extra care and attention (and she already had four children). Her daughter (17) is pregnant, so she will be a grandmother soon! And that in the year that she will be occupied by elections, with the possibility that she will become the vice-president. It is an awful lot and Pluto on the MC of the solar return points at the challenges, the difficulties and the price to pay. Where does she get the energy? Mars quindecile Uranus, that where it comes from, with Sun conjunct Mars.

JOURNALISM
Her MC-routing in this chart is through Taurus, Venus in Aries at Aries Point, and Mars in Aquarius quindecile Uranus in Virgo, in mutual reception with Mercury in Aquarius. That is perfect for a journalist.

THE SUN-MARS-URANUS CONNECTION rules the 1st and 7th house and is in the 7th house. I think the National Inquirer launched the idea that Sarah Palin had an affair. I wondered about the marriage when I noticed this combination, because in the charts of divorced women mostly you find conflicting Sun_Mars or Sun-Uranus. The Mars conjunct Saturn affliction is also pointing at a possible end of a relationship with a man. Venus in Aries is another difficult position for a marriage, especially at Aries Point! And we see Neptune square Ascendant-Descendant, too. Maybe religious conviction kept the marriage going in spite of difficulties in the past. Her chart with quindeciles to Sun, Mars and Saturn in the 7th house probably devoted her to her marriage. It is exactly the Mars-Uranus connection that ties her chart with McCain's... 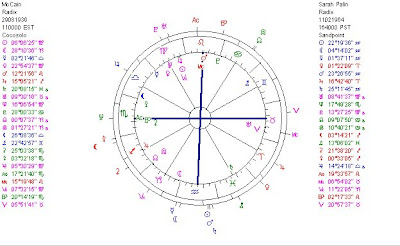 MCCAIN AND PALIN
I already mentioned that his Sun is inconjunct hers. That could make it difficult for them to 'shine' when they are together. They don't match when it really comes to it and the might live their lives and do their things their own way in a sort of a living together, apart:)

McCain's Sun is trine her Midheaven if she is born at 16:40 hours. And he certainly brought her fame and glory. But what about her Neptune conjunct his Ascendant? Neptune is always a sensitive and unreliable factor in a relationship, because Neptune is the symbol of fantasy, illusion and beliefs or romance. Neptune shows an image of what one is in the eyes of the other. The strange thing is that her Neptune is also square the Ascendant of Barack Obama!

What joins them - whatever hour of birth! - is a quick mind (Mercury-Uranus; both have a creative biquintile of Mercury and Uranus) and a hot temper in control (Mars-Saturn-Uranus). He has Mars square Uranus, she has the quindecile; he has Mars biquintile Saturn, she has Mars conjunct Saturn. This combination means that they have extraordinary powers of resistance. They are both strong and able to deal with a lot of pressure.
Sarah's nickname is 'barracuda'...They will be fighting the status quo together, but they will also be popular together and stimulate each other (Moon-Jupiter in both charts, for 11: 00 and 16:40). They will go their own way (Sun inconjunct Sun: sort of a living together, apart). Still, with Venus conjunct the composite IC we may count on mutual sympathy, too.