THE SATURN-URANUS PATTERN AND THE ELECTIONS 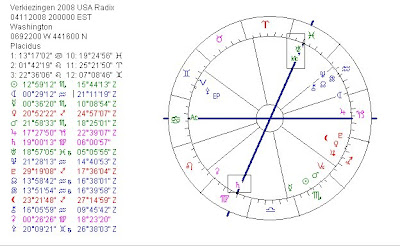 Senator Obama's main issue seems to be 'making a change', changing the status quo. It is the issue of Saturn and Uranus. Saturn and Uranus are in opposition in the last few weeks of the elections in the USA. And they are on the MC-IC axis of Election Day.

I wrote about Obama and Saturn-Uranus before (see references below). There is a sort of a pattern of Saturn and Uranus in his chart and in the chart of Election day. On Election Day Saturn is tightly opposition Uranus, on the axis of MC and IC. On the day that Obama was born, Saturn was tightly inconjunct Uranus and both are connected to his wife's Sun. But that pattern is also present in Palin's chart! 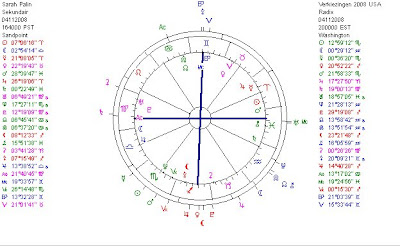 As you see above, the Saturn and Uranus of Election Day are close to the progressed horizon of Sarah Palin (if born 16:40), who has Sun in Aquarius (ruled by Uranus) conjunct Saturn! And her Saturn is opposition Obama's Uranus! It s a clear picture of a controversy between conservatives and democrats.

Saturn inconjunct Uranus in Obama's chart
Michelle Obama's chart
Electorall Compass for those who haven't made up their mind yet...

And I found another astrologer posting about this pattern:
Astrofuturetrends.com about Saturn opposition Uranus and the Elections.
Geplaatst door Astromarkt op 8:31 AM