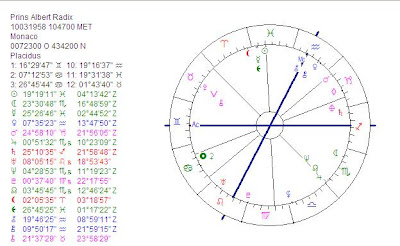 On the 19th November 2005 I wrote:
Today Albert of Monaco (born March 14, 1958 at 10h47 a.m.) became officially the Prince of Monaco. A range of transits and progressions accompanies the coronation.


PROMINENT SUN IN PISCES SESQUISQUARE NEPTUNE
The Sun is on top of his chart and in Pisces and that seems to fit a man in his position, drawing the constant attention of the media.

Now I read that he is about to announce his plan to get married (at age 50!). It is not his first relationship (he even has children), but it will be his first official marriage. Venus in Aquarius square Neptune and opposition Uranus. And Saturn in the 7th, square ruler 1 Mercury. Conflicts between the 1st and 7th house and/or their rules, conflicts between Moon or Venus with Neptune and hard aspects of Moon with Saturn are (in the charts of males) indications for having more than 1 serious relationship with a woman and so does a conflict between Mars and Uranus (he has a quindecile). The multiple indications for divorce may have kept him from marrying sooner (and prevented divorce).

'Sources' say that he will shortly announce his marriage. He is to marry Charlene Wittstock, born 25th January 1978 in Southern Africa. Her Sun is tightly square his Neptune (his Sun-Neptune is sesquisquare), her Pluto trine his Ascendant and her Mars square his Jupiter. Very soon transit Uranus will be conjunct his natal Sun. What does it mean? It means that they might see each other with pink glasses on, that she has influence on his behaviour and that they probably will have children. His life will be changing now and there might be just one little scandal in the end of his bachelorship before he settles down. Uranus is full of surprises, always...And Uranus is dispositor of his Midheaven, so very important for his position in society. An official marriage will of course improve his position and status. The conjunction is the symbol of the fresh and surprising (Uranus) start. And that can be at any age!

PS He is still not married. Today a former security officer of Albert told the world that Albert was blackmailed for years because of a video showing a sexual 'act' with an unknown woman. He also told us about business involvement with dubious parties. Uranus surprised us, because something came 'in between' and changed the plans...

Albert and Charlene are still "dating". Could you give a comparable chart for them? Why do they stay together, even though there is no love between them? Do you see a chart under their chart?

Someone has said that Charlene has the chart of a widow, dragging Monaco down. Can you please explain and even answer if that is true, in your opinion?
Thanks

Thanks for your questions!

In the post I mention the fact that at the time of the engagement his Sun was opposition Neptune and that his Neptune is square her Sun. So perhaps there is confusion in their relationship and they don't see each other but through pink glasses. I don't consider this 'a good sign' because Neptune is the symbol of secrets, rumors, faking and illusions. But sometimes Neptune is reflecting romance. I have written about the effect of Neptune in cases of love in (here is the link: ).

The couple doesn't really match. Their Venus is in Aquarius for the love of freedom!:)
Albert and Charlene share a progressed Venus inconjunct natal Pluto in 2010. That is difficult for a relationship and for money issues and produces stress. Their wedding plans might be 'challenged'.

I am sorry that I cannot be more specific (I don't have her hour of birth, even). But in short: they don't really seem to match but share the same taste, sympathies and ideas about 'what love is'. They will have to do their very best to make a marriage work.

About Charlene's chart: I don't have her hour of birth (does the other person that you mention?). I don't think that their ARE charts of a widow (though there are charts that show the possibility of more than one marriage). And I don't think that Charlene would drag Monaco down (and why should she?). Perhaps you could ask the person who says this about the astrological reasons why he/she says so. I don't see them.