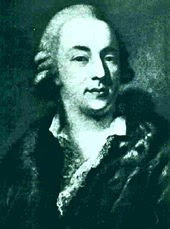 Casanova was a superman who managed to impress a lot of ladies. He had and has a mythical reputation. He is a real historical controversial person who was very skilled in seduction and getting into trouble (and out again). He had Mars in Pisces. When Mars is in Pisces, action won't be direct. There will be persuasive action and energy to get things done. Mars in Pisces sometimes is a smooth operator, especially when Mars is 'calling'. And his Mars called him! There are no Ptolemaic aspects in sign or orb 5 degree with his Mars.

MANIPULATIVE
I think his 'calling' Mars in Pisces, quindecile Pluto opposition Aries Point inconjunct the Ascendant is a perfect description of a sexually/agressively obsessed person with misbalanced behaviour in that matter. He lead a dangerous life and spent months in prison*). Casanova was manipulative. This manipulation goes together with Neptune square Ascendant (a double or dubious presentation).

MYSTERIOUS
Neptune and Pluto both aspected the ascendant and the midpoint Neptune/Pluto is sesquisquare MC: he had a mysterious way of doing things and actually made belief that he had occult powers for a while. And he is still a mythical person. 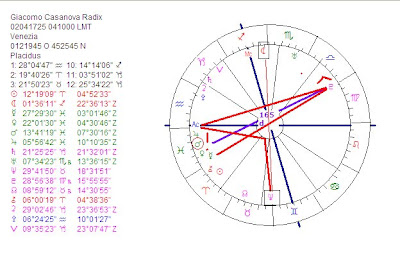 TALKING ABOUT SEX
Pluto is on the cusp of the eight equal house (inconjunct the Ascendant) and Pluto is opposition Mercury. 'Let us talk about sex', that is the song that comes to my mind, when I see this. But, Casanova did not just talk, as it seems.

ARTIST
Should it be just coincidence that transit Saturn is now square his MC and opposition his Mars? There is also transit Jupiter sextile his prominent Mars. So let me end with saying something nice about the man:). In everything he did, he was an artist. He wrote part of a libretto. He was the son of a violinplayer and his mother was acting! He had an artistic background and music is in his chart. His Sun/Moon semi square Venus and square Uranus tell us that he is in heart and soul a diplomat with artistic aspirations. Undoubtly, Casanova was an artistic, creative person (Venus<>Neptune, dispositors of the Midheaven), Sun/Moon with Venus...
Maybe the 4 planets in Pisces in the first house (Venus, Mars, Mercury and Jupiter) opposition Pluto say enough about having an enormous succes with his stories about passion. It is because of his stories that we know him up till today. The 'calling' lack of placements in air signs may have contributed to that**)
Still, it seems that his adventures were not invented or just fantasy, but real experiences.

See his picture with bedroom eyes and his CV in Wikipedia.
He doesn't look like attractive males of today. For the charts of those males, see:
Post about Happy Valentine (David Beckham)
Actors and politicians and Rudolfo Valentino
Actors playing James Bond
Chart of Brad Pitt

*) Saturn quintile Uranus, ruler Ascendant could be related to his escape from the prison of Inquisition after 15 months of imprisonment. The midpoint ASC/MC is related to Jupiter and Saturn for ups and downs.

**)See my article on Astromarkt