CHART OF JOSEPH EDWARD DUNCAN III
and how his birth day just cannot explain it all... 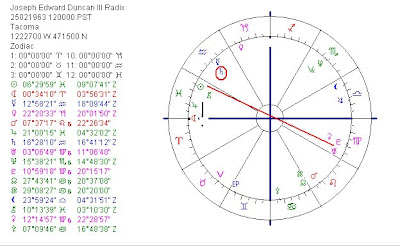 Extreme persons use to have extreme charts. This does not mean that an extreme chart has to lead to an extreme (criminal) life. Much depends on circumstances, gender and genes or another little mistake made by mother nature at the time of birth. Joseph Edward Duncan III is an example of that.

The book 'Power of Birthdays, Stars and Numbers' is attractive, but this example shows us that there is more than a birthday and maybe even (...?:) more than a chart, when it comes to the facts of life. Charts, IMO, should be read only in the context of time, place, gender, social and cultural conditions and other influences that just cannot be the same for all of those who were born on the same day. The ancient example of the king and the stable boy born on the same place and hour shows us that lives and positions only change when there are chances and strong indications in the chart. There were strong indications of changes in life on the day that Joseph Edward Duncan III was born. That was 25th February 1962 in Tacoma. Many others were born that day. They did not turn into a sociopathical murderer, like he did. On the day that he was born, a famous German kayaker and sports teacher (Birgit Fischer) was born, too. She is a divorced mother and celebrated sports woman. Such a difference! One who rose to fame and one who became infamous.

Sure, they will have other charts because their hour of birth gives them different Ascendants, MC's and positions of the Moon. They also have a different gender and their situation and genes will have been different. Still, what a different kind of lives...She was voted sports woman of the year 2004, when he was charges for touching a little boy (in 2004). She stopped her international carreer in 2005, he killed a family in 2005 and was arrested. In both cases an important change. But in what a different way!

DEATH SENTENCE
Joseph Edward Duncan III was sentenced to death several days ago. He raped and tortured two children, brother and sister and shot the boy in the end after killing their mother, her fiancé and her elder brother. It was not his first killing or rape. He started his criminal life at the age of 17 (and maybe even earlier) and he was not isolated, unfortunately for his victims, though he spent many years in jail.

PREDATOR
Often people talk of Pisces as the soft sign. I always remind them of sharks. Mengele, for example, was also a Pisces. This man was a predator with an antisocial personality disorder. Of course we are not talking of a person with normal genes or a normal background. There is something wrong with this person and the usual reading of charts cannot match up with this character. The aspects and positions of the day that he was born, contributed to an already sick person, like if you are throwing seed in the mud.

VENUS AND MARS AFFLICTED
Joseph Edward Duncan III had violent fantasies. There are indications for problems with relations or in sexuality. Sun inconjunct Mars (indicating divorce in a woman's chart) and Sun semi square Venus. Venus quindecile Mars (obsessive passion; this can be a passion for sports! or art, too). Sun opposition Uranus/Pluto: the key to radical or extreme impulse; in the chart of a woman Sun-Uranus afflicted is an indication for a divorce.
The oriental Saturn (in Aquarius) square Neptune (ruler of the Sun) and both semi- and sesquisquare Aries Point lead us to 'being sick' or 'the disadvantages of fantasies and illusions'.
The Moon 'calling' shows emotions and personal needs at any possible level.

CHART + ? =
Picture yourself a genetical sick man born without empathy (a sociopath), who is extra impulsive and obsessed by sexual activity (Venus-Mars), with enormous 'needs'and you can imagine what kind of a person this combination of genes and chart could create.
Still there must have been a crucial (angular) drive, also, that lead to the violence and the killing. We cannot see those indications without hour of birth in hand.

TRANSITS AND PROGRESSIONS
The Uranus-Pluto aspect with the Sun in the natal chart is being activated in the period of the Idaho murders and kidnapping (2005). Uranus by transit was opposition his Pluto all of the time. In the solar return chart of 2005 we see Sun conjunct Uranus (time for a change).

NOW
The death sentence is with Saturn conjunct Pluto and the smile on his face will have to do with Uranus conjunct Jupiter. Maybe he is more afraid of prison than of dying.

CONCLUSION
I think it is hard to find the killer in a chart unless you know it. Charts have no moral at all. Jupiter on the hand of Dutroux, so that the judge sets him free, is one of the examples of the cold fires in the sky with pityless eyes. The same drive and passion can be used for sports or for one's sick desires and the planets of change are disastrous for one and just a change or even a move for another. That is why it is hard to read charts, sometimes...