There are several historical moments related to the fall of the Berlin Wall on November 9, 1989.

1. Minister Schabowski said at 18:53 hours, in answer to the question of a journalist, that the borders should open at once ("Dass tritt nach meiner Kenntnis ...ist das sofort, unverzüglich"). Hot news and that is why Uranus is right on the Descendant.
2. At 21:30 hour people started to cross the border. They lost their passport if they did,however. The MC is conjunct Jupiter (for joy, international, travel) opposition Saturn and Neptune.
3. At 23:30 hour Pluto is on the IC (opposition MC). Pluto is the most prominent planet of the day already, strong in Scorpio, sesquisquare Aries Point and oriental (rising before the Sun). At 23:30 hour the first Eastern German is allowed to travel and cross the border and allowed to get back if he wants to.
4. The official timing was supposed to be on November 10, at 4 a.m. That is with Chiron on the MC and Jupiter on top. 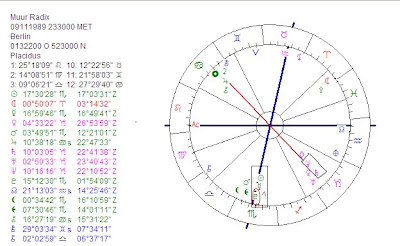 The event chart above is the chart of 23:30 hours and shows the changes this way:

SATURN-NEPTUNE
The aspct of Saturn conjunct Neptune comes back with an interval of about 36 years. Before 1989 that was in 1953, the year that the Russian dictator Stalin died. That ended a period of severe supression. In the year 2026 it is time for the next Saturn-Neptune conjunction. The opposition of Saturn and Neptune was in 2005/2006. That was when Angela Merkel became the prime minister of Germany. She grew up in Eastern Germany! It seems that Saturn-Neptune conjunctions and oppositions are related to communism.

Neptune is the symbol of ideology and belief, the collective and all things that go 'beyond', far or 'without limitation'. Saturn's symbol could be that of the fall and the end (of a period in time). The conjunction is the aspect of the beginning. Jupiter in opposition with Saturn/Neptune adds joy.

INTERNET
In 1989 ARPANET stopped and the Internet became the standard for the world wide web. In 2005 (Saturn opposition Neptune) the second fase of WWW, Net 2.0, started. Web 2.0 will somday end the need to have personal software. It will be available on the Internet!

PERSONAL SATURN-NEPTUNE
In personal charts a close aspect of Saturn and Neptune often refers to illnesses, if not your own, than of illness as an important issue in your life or carreer. When you compare that to the way Saturn-Neptune combinations effect the world, you could see same resemblance (the decay of a system). Noel Tyl tried to describe Saturn-Neptune in a positive way. In Solar Arcs even Tyl speaks of 'suffering, losing focus, giving up, denial, depression' etc.

Still, I have seen Saturn-Neptune being mentioned in connection with the Internet, as well. That might be because of the unlimited business or because of the viruses that circle the net:)

If in close aspect (within 1,5 degree) and if Saturn or Neptune has a prominent place in the chart (for example: angular or oriental) the issue of illnesses could be important in your life, just like losing focus or control at some moment in your life.

In 1989 Saturn was conjunct Neptune within 1.5 degree of orb at different moments between mid February and December 6. That was also between November 1952 and Septembder 1953. See your efemeris or Astro.com for the right moments and positions.

Movie of the wall on Anywhere
Geplaatst door Astromarkt op 8:22 AM

Wow I feeling young aha. I am 24 and wasn't born until 1992; however I have many older friends born three years before me in 1989 and in the past two years the three that I'm closest with all "lost it" and had mental breakdowns and developed schizophrenia