CHARTS OF USA LEADERS
AND 2ND HOUSE OF BANKS AND MONEY

The financial crisis forces the president and the possible presidents-to-be to come together and discuss a solution for the future (the next presidential period). It seems to be the only way and the chart of George W. Bush looks like he will succeed in his efforts to save the nations' economy.

JUPITER OPPOSITION SUN AND MORE JUPITER
October 4, that is the day that George W. Bush will have transit Jupiter exactly opposition Sun for a success with question marks, but still: a success. It might be the rescue of the Western economy. In his solar return chart we see Jupiter on the Midheaven opposition Sun. So it is an important issue. Help is on his way. 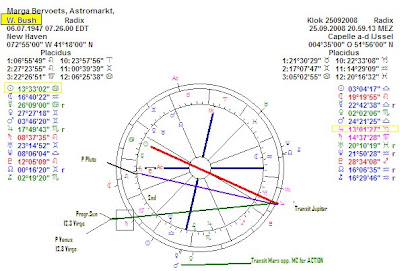 This is the final year and these are the final months of his presidency. He cannot leave the country 'behind' in a state like this. And he probably won't because Jupiter is also trine his progressed Sun, inconjunct his Progressed Pluto and trine his progressed Venus. That seems to be a good sign for helping (Jupiter) with a lot of money (Venus and Pluto).

It makes me believe that Western economy will survive, in the end. Let's keep in mind, that it will be a long run till Jupiter will make a good aspect with Pluto and trust (Jupiter) will be restored (Pluto) again. In fact, that might take some (about 3,5) years. Nevertheless, there are fortunate aspects with the natal and progressions of Bush. 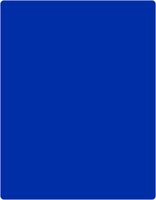 As president Bush is the political leader of the nation there might be hope for the USA's position with those transits. But then, how does the crisis show in his chart? Hmm,...Transit Saturn - for worries - in his second house! The next president will have transit Uranus in the second house (Obama) - for 'casualities - or transit Pluto - for challenging problems - (McCain). Those are slow moving transits. Whoever the next president may be: he will have to deal with financial changes. A lot! The second house blues is a lengthy song.