Attractive modern entertainers and actors, (those males who know and use their appearances), often have the hot planet Venus in a cool sign like Virgo or Capricorn. And they have Saturn in aspect with Venus or the Ascendant. We admire them from a distance. Males with closer contacts with women have more placements in Taurus and Libra. Examples? Read on...

Take Obama. Barack Obama is good looking. His prominent Venus (square Aries Point) is sesquisquare his Ascendant. He is however not 'cool or sexy' in his behaviour. He does not earn a living with being beautiful, does he? Not like Brad Pitt does, or one of the James Bonds. The James Bond actors all have indications for the strong, cool man (Pluto, Saturn, Capricorn, Mars-Saturn). One of the Bonds, Sean Connery has Saturn on the Ascendant in Capricorn, even.

COOL IN POLITICS
JFK had Venus trine Ascendant and the Moon in Virgo. That was cool and charming enough and people found him attractive. There was no connection with Saturn. He did not make a living thanks to his looks.

THEORY AND PRACTICE
It seemed to be a nice theory. Then I noticed the charts of GWB and Bill Clinton. Did women find George W. Bush attractive, I wonder, with Saturn on his Ascendant ('cool')? Or did his status attribute to the reactions of the ladies? George W. Bush is not ugly and he is distant enough to be cool and under control.

We admire the beauty and charms of those who are on the screen and beyond reach. In the beginning of the (soundless) movies, it was important to demonstrate feelings and passion. A cool person would not have impressed the public in those days. Drama and over-acting was needed because the expression was all they had to tell the story. In a love story, it was needed to see the warmth and the passion! That is why they had a Taurus + Libra Valentino, for example.

Rudolfo Valentino, the sexy man in the age of the silent movie, was not cool at all. He had Venus in Gemini, Moon in Libra and Libra Ascendant. In his movies you see him melt away all women just by looking into their eyes. That is what happens when Venus/Mars is in aspect with Zero Aries and Ascendant...passion!

This is the chart of Valentino: 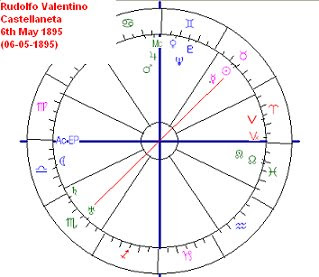 There is a lot of good taste, love and sweetness in his chart. Venus is right between Jupiter and Pluto for success with the ladies. There are no positions in fire signs. Mars is in Cancer, conjunct Jupiter in the tenth house. When he was a teenage boy he tried to become a soldier but his chest was too small...

For romance we find Moon in Libra trine Neptune. He is good looking and charming and seems to be romantic at first sight. Venus in Gemini made him marry twice. The first time the marriage lasted one night only. The lady was a lesbian. He was not divorced yet when he tried to get married for the second time. He was arrested for bigamy!