PAUL NEWMAN DIED
WITH JUPITER ON THE ASCENDANT

Paul Newman died today with transit Jupiter conjunct Ascendant in a period of a changing progressive sun sign (for a change in life or way of living*). In his natal chart Jupiter is in the 12th, conjunct his Ascendant**). Jupiter is the symbol of the doctor (help), of happiness and the symbol of travelling (passing away). The presence of Jupiter in times of death is not uncommon when suffering ends. See the chart drawing below for more transits and progressions at the time of his death. Click for more about the natal chart and life of Paul Newman 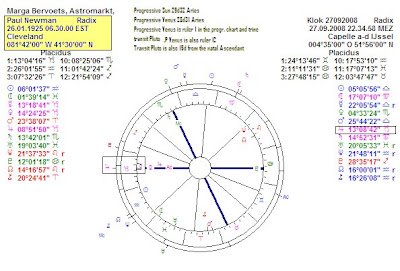 *) Sometimes, in certain circumstances or at a certain age, the progressive sun changing sign terminates life as it was before.
**) At important moment in life (such as death is, for example) natal aspects are being 'activated' by transit or progression. Jupiter-Ascendant with Jupiter in 12 could be considered as a 'way out'. In the study of Ken Gilmore ('Who will survive?')Jupiter on the Ascendant is present in the chart of the survivers of a shooting. They were close to a way out (a door or a room). I have Jupiter on the Ascendant and most of the time in public situations I sit at a place with space (end of the table) or near a doorway. The 'way out' seems to be one of the meanings of the Jupiter-Ascendant combination.