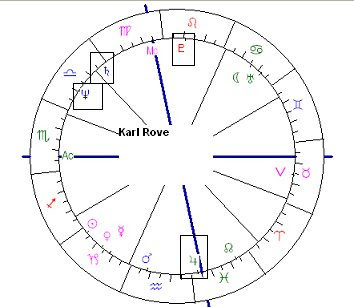 Venus in synastry is the planet of sympathies and kindness. Venus sometimes is important in the connection between the charts of men. Karl Rove’s Venus in Capricorn is in mutual reception with Saturn in Libra. That brings business and cool facts into the world of sympathies and joy. Venus-Capricorn-Saturn is also the combination that we find in the charts of attractive males!
It gives him a realistic and somewhat cold approach when sympathies are involved. And in business he will be a diplomat. Karl Rove is in the news again and Venus is of importance in that matter. In matters of sympathies Rove knows how to keep his head cool.
Let us see what his Venus does with Obama and McCain.

Karl Rove's Venus is inconjunct the natal Sun of Barack Obama (sympathy, but...) and the Venus of Obama is opposition the Sun of Rove (question marks with sympathy). The Venus connection maybe contributed to Rove’s statement that McCain had gone too far with sleaze ads. There is no such Venus connection with the chart of McCain. McCain's Venus is opposition the Node of Rove (question marks with good teamwork). Rove's Saturn is conjunct his Mercury, his Pluto is inconjunct McCain's Saturn.

ROVE: HARD MAN WITH A HARD CHART
Karl Rove is the controversial advisor of George W. Bush and I noted once 4:14 a.m. Denver, December 25, 1950 for his data. His Sun is sextile Jupiter, square Saturn and sesquisquare Pluto. The midpoint combinations with the MC are Sun/Mars, Mars/Saturn and Pluto/Node for hard confrontations. ALL of his planets are afflicted and harmonious aspects are rare*). The tightest aspect is Sun sextile Jupiter, however. I see that as another indication of the validity of narrow aspects. He DID improve his life and have success, whatever political opinion you may have about him. At the time of the Bush campaign it was said that Karl Rove was the man behind the sleaze ads of those days...

Karl Rove did not have an easy personal life and yet managed to get on top of the USA administrations. That is maybe the effect of hard aspects. They force you to move on. But it sure was the effect of the fact that Mars, Jupiter and Pluto are prominent in his chart.
See Jupiter angular (on the IC). Jupiter is inconjunct Saturn (for the hierarchy and the disadvantages of success). Mars is calling!, inconjunct Uranus (for special efforts and a short circuit). And notice that Pluto is on top of this chart. Politics, money, influence and power above all...The combination of Mars calling, Jupiter angular and Pluto on top is the combination of Mars-Jupiter-Pluto, a success combination! Pluto is the Apex of a midpoint yod with Mars/Jupiter for another success combination.

INDEPENDENT URANUS
With Uranus on Sun/Moon we get the confirmation of the fact that he is a controversial person, independent and ahead of the others. In this specific matter of sleaze ads, his words come as a surprise and Uranus is full of surprises.

His relationship with George W. Bush seems to have been one of forcing an opinion to each other. They share an aspect between Mercury and Pluto. Mars of Rove is on the Ascendant of Bush. And Rove's Venus is there again, opposition the Sun of Bush. That is the other way around of the Sun-Venus synastry with Obama.

JUPITER NOW, SATURN LATER
Rove's progressed Ascendant is connected to Jupiter right now, so that the way people see him (Ascendant) is improving (Jupiter), but mid January 2009 he will have the progressed Sun inconjunct Saturn. Should that be an indication of Republicans losing, I wonder? Anyway, this aspect will make him lose control or status somehow. Notice that he has Jupiter inconjunct Saturn for ups and downs or are they downs and ups?

*) Sun sextile Jupiter, Venus biquintile Pluto (both tight) and a wide trine of Jupiter and Uranus (valid for a longer period of time)