Today a car bomb cost the lives of 4 innocent people in Cali, Colombia. Cali has been the scene of an explosion before. It is still not certain whether it had been a terrorist or political act or an accident. Seven trucks loaded with explosives destroyed part of Cali on August 7, 1956 at 1:05 a.m. The astrological chart of the incident has a calling Sun right at the midpoint of a prominent Uranus and dito Pluto. Uranus and Pluto are in combination the planets of immediate change (and sometimes also: of disaster). 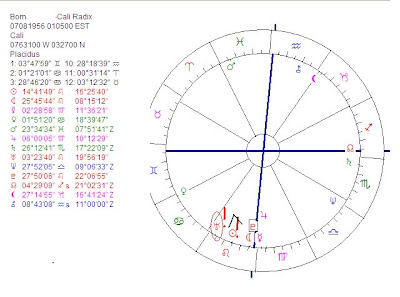 Here you see the chart of that moment in time, with the Midheaven in Aquarius, ruled by the oriental and calling Uranus (N.A. in sign or orb 5 degrees) while Pluto is on the IC. Uranus and Pluto: it is a revolutionary combination of prominent planets.

The Sun does not make major aspects in sign or orb 5 degrees and is sesquisquare Aries Point, and is calling for attention, right in the middle of the important Uranus and Pluto.

(BTW Notice that Uranus is sextile the Ascendant. IMO that sextiles do not mean 'harmless' or 'harmonious', but 'easy ways', 'letting go').

That explosion in 1956 took the lives of at least 2000 persons. And it ended the political life of General Rojas Pinilla. This chart of the moment in time that changed the lives of thousands of people who were at the place of the explosion has a prominent place for the symbols of an immediate urge for change and revolution: Uranus and Pluto. It does not mean something had to explode this way. It was just a perfect moment for an explosion or any other accident or sudden change.