THANKS TO WALTER PULLEN & HIS CHART 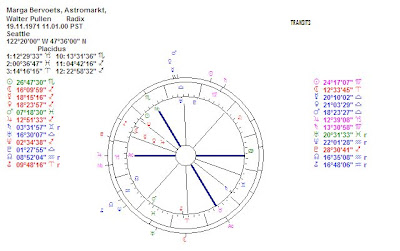 Thanks to Walter Pullen for everything that he does to promote astrology. He offers free programs like Astrolog and various insights and tools! I am happy to have found such a person today. He is the good news in astrology world. As it happens, transit Jupiter is conjunct his ASC. So time for a tribute, is not it?

Walter Pullen was born November 19, 1971 at 11h01 a.m. in Seattle with an oriental Uranus on top of the chart. Uranus not only symbolizes astrology but also technology. Mercury conjunct Venus and Moon sextile Uranus are his tightest aspects, so that he is good at communications and has a feeling for technology and astrology.

There is a lot of Sagittarius in his chart (50%) and Jupiter is conjunct the midpoint ASC/MC . He is truly spreading the word and publishing, is not he? Jupiter is also the final dispositor of the MC-routing and strong in Sagittarius, sextile the prominent Uranus on top. A very interesting 'case' of generosity with astrology.
Geplaatst door Astromarkt op 9:18 PM