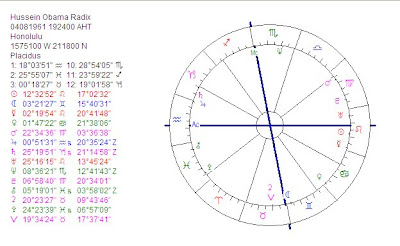 I am thinking aloud in this message about the chart of Obama. Is this the next president's chart? Possibly.

On Election day, his Jupiter is conjunct the Moon when the polls close their doors in Washington. And btw the Moon of the USA Gemini Rising chart (4th July 1776 2h13m36s Philadelphia) is conjunct his natal Ascendant. What can I do to see if this is a presidential chart? I can compare his with the charts of other presidents and candidates. I can read his chart as if I did not know he was a candidate (in which case I find an artist more than a president and start wondering if the HOB is REALLY REALLY his). I can look at his progressed chart and than I see a more political profle than in his birth chart (Pluto rising before the Sun, for example). But:

At first sight, Barack Obama is quite different than other presidents of the USA. The majority of them have an important Jupiter and Pluto for self confidence. F.ex.:

EXAMPLES OF JUPITER AND PLUTO PRESIDENTS
Jimmy Carter (October 1, 1924 7a.m. Plains Georgia) has Jupiter inconjunct MC and Pluto crucially placed on top of the Midheaven! Moon is semi sextile Jupiter in own sign.

Dwight D. Eisenhower (October 14, 1890, 17h45 Denison) who was above all a general, had Mars conjunct MC, Jupiter (3rd degree of Aquarius) in the 10th house, tighly square the Moon and Pluto 'calling' (not making Ptolemeic aspects in orb 5d and in sign).

Richard Nixon had Pluto high in the chart, Jupiter oriental...but the Moon did not contact Jupiter (9th January 1913, 21h30 Yorba Linda). Maybe Jupiter in the house ruled by the Moon (the 4th) compensated this.
His tightest aspect is Mars opposition Pluto (Hillary Clinton has Mars-Pluto too).

Gerald Ford (14th July 1913 0h43 CST Omaha) had Pluto oriental, Neptune on the IC, the Moon in the 4th degree of Sagittarius (sort of a Moon-Jupiter connection:) and Jupiter calling.

MCCAIN, CLINTON AND OBAMA
McCain (29th August 1935 9 a.m. Cocosolo) has Pluto on top, Mars oriental (first of all a soldier), Jupiter inconjunct MC and Moon in the 4th house, but not connected with Jupiter. The profile is not complete.

Hillary Clinton (26th October 1947, maybe 20 hours, Chicago) has Neptune oriental, Moon trine Jupiter out of sign, Sun calling and Pluto sesquisquare Aries Point. Jupiter does not make Ptolemeic aspects in sign or orb (and is of course trine Moon out of sign, I know), but using my own rules Jupiter is calling in her chart. So she had the profile, she was a good candidate.

Obama (4th August 1961 at 19h24 AHT Honolulu) has the Moon trine Jupiter, Pluto?, Jupiter? and instead Neptune on top, Moon on IC. He has a different profile! Does that mean that he won't become a president? His progressed chart shows Pluto rising before the Sun and the retrograding Jupiter in the 10th house. Maybe he was not a born president, but he might BE one. Or a different kind of a president. Let us take a look at the chart of Al Gore, the one who didnot make it.

FAILING CANDIDATES
Al Gore (born 31st March 1948 at 12h53 EST Washington) has a 'calling' Mercury and Jupiter (conjunct with the Moon, though out of sign), Pluto is the first planet in the first house, but not conjunct the Ascendant (using a tight orb). Why did not he make it? Sun is opposition Neptune, while Sun and Mars are in mutual reception ruling the Midheaven. Neptune is the blame. Notice that unclear and misty results of the elections ended his ambitions. Neptune was opposition his Ascendant in 2000. At closure time on election day George W. Bush's Sun was conjunct the Ascendant. No signs in the chart of Al Gore.

OTHER PROFILES IN CHARTS OF PRESIDENTS
OK, one of them has got to be the president, either McCain or Obama, even though their profile is different from other presidents. Abraham Lincoln had a different profile, too. His Sun is rising, Neptune conjunct the MC. Moon is sextile Jupiter. Still, he is an important president in history. George Washington (22 February 1732, 10h05 am Westmoreland) had an important Moon rising before the Sun, Mars on the Descendant and much self confidence (Sun biquintile Jupiter and sesquisquare Pluto), but he didnot have an important Pluto or Jupiter.

So maybe Obama does not have it all and neither has McCain, but only time can tell who will win if you consider their charts to be important. And time says:

PROGNOSIS (TAKE CARE, BASED UPON 9:am, LATER IT WAS KNOWN THAT THE HOB OF MCCAIN SHOULD POSSIBLY BE 11:00 A.M.)
McCain's solar return has Saturn on the Descendant. McCain's solar arc Saturn is semi square the natal MC on the 14th of November. Transit Saturn and Uranus in harmonious aspect with the progressed Sun and progressed Saturn conjunct and Neptune opposition the final moment of election day in Washington (20th degree of Pisces MC).

Obama however has transit Moon conjunct his natal Jupiter on that moment and transit Jupiter square his progressed Ascendant.

And BTW, George W. Bush's Sun is on the Ascendant of the final moment again:).

CONCLUSION
I think Obama does not have the confidence that most of the others had or have. And he might be a dreamer with problemous ideals that do not easily come true (Sun square Neptune on top), and he might promise too much (Mercury opposition Jupiter). With this chart he could have been an actor as well (Moon crucial, Neptune on top...) because there is little in the chart that refers to power. I am not sure about the winner, but given the Neptune effect in the chart of McCain at the final moment of the elections, I very much doubt that he can be sure about being the winner on the 4th of November. In the past it took the USA weeks to find a winner, so maybe that moment does not reveal it all. The birth chart of Obama makes me ask questions. But when you read like if you did not know who he was you would probably say with me:

I see the chart of an idealist, a person who might be hiding behind the picture of an ideal person. He is a leader,ok, he is good with children or 'the people', he knows how to be nice and he could have been an artist playing the role of the president of the USA. And that thought reminded me of Ronald Reagan, born February 6, 1911, at 3h30 CST in Tampico, Illinois with Uranus rising before his Sun (he got old, did not he?) and with no crucial placement at all. His Sun and Jupiter semi square/sesquisquare Aries Point and Pluto calling, however, pointed at the same profile that I mentioned above.

I have 5 months to consider and ponder left. Am I lucky?:)One thing I am happy about is that I don't have to choose and vote. In fact, neither do the Americans. They can simply select the program instead of the man, because governments are teamwork in a democratic country. Somewhere on this blog, in the Label Elections, you find a link to a way to vote if you are not American:)

"I see the chart of an idealist, a person who might be hiding behind the picture of an ideal person."

I agree. And part of what we don't see is his Moon in Gemini square to Pluto, his need for power and need to control. Forgiveable faults, but worrying when the person seems to be so identified with their ideals.

Obama, nor any president, is a leader on his own. His ability to surround himself with a powerful cabinet is what you should be analyzing. I find the blog responses on this site are limited to surface issues of public service, meaning combing over the chart of an individual leader as if that person alone was the only power source to drive our Nation.

I have also not found an birth chart response in the correct context of relevant future politics; American diplomacy is more dead than ever and how powerful will Obama be reintroducing a hands on approach peace talks? How powerful will he be in the political areas that need the most attention?

I am in the happy position to choose what I want to analyse and ...this blog is about astrology and personal charts, not about politics or mundane astrology. There are other blogs that might serve you:)