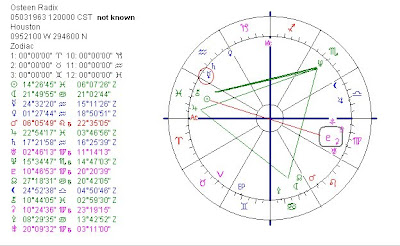 Joel Osteen can talk for hours. That is not amazing when you notice that Mercury (the planet of communications) is prominent in his chart. Mercury is in then 25th of Aquarius, rising before the Sun and Mercury is calling in his chart. Mercury does not make major aspects in sign or orb 5 degrees. Joel Osteen was born March 5, 1963 in Houston (Texas). The hour of birth is unknown.

Of course we see (the possibility of) religion in his chart! Pisces-Sagittarius and Jupiter-Neptune are related to spiritual convictions. We see:
- Sun in Pisces
- Sun trine Neptune, tightly
- Moon in Cancer is trine Jupiter and trine Neptune (a big trine). Jupiter is in Pisces
And I bet that Jupiter and Neptune are related to the Midheaven. Also, if Osteen was born at a.m., his Moon will be translating light to have the Sun related to Jupiter AND Neptune.

Joel Osteen is in the news today, and is it about something up there again:). His wife has been accused by a stewardess of Continental Airlines, Sharon Brown. She says that Joel Osteen's wife caused her anxiaty and...hemorrhoids (LOL: she was pushed against the toilet door, that is why perhaps:) in a discussion/fight about a dirty spot on her seat. I don't think this will harm Joel Osteen much, but there are indications for a certain move. His progressed Sun (about to change sign for another lifestyle!) is trine transit Pluto.