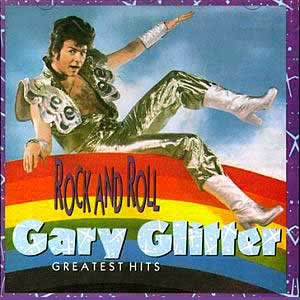 In the week of November 2005 GARY GLITTER, pop artist, was arrested for the assault of two very young girls (11 and 12). This was not for the first time. Gary Glitter is a pedophile.

Gary Glitter was born May 8, 1944 in Banbury, England. I don’t know his birth time. Neptune was square his natal Sun in 2005/2006 and Saturn is now square his Uranus. When he will be free (August 19) Uranus will be sesquisquare Pluto (for a combination of change).

In my predictions for 2008 I wrote for Taurus:

“…all the time they have to say goodbye to persons or places. Jupiter in Capricorn will be helpful and sends you a wise advice. (...) The Taurus born between April 20 and May 11 can thank Saturn. That planet will increase the respect that they get, make their lives more stable and the people around you will appreciate and value you”

I bet that Gary Glitter can forget about the ‘respect’ in many ways. But he said that he was going to work hard on a new album. This year however Solar Arc Uranus is semi square his Saturn. That is another indication for frustrations about the limitation of freedom. Of course, in his preferences his freedom will always be limited in major parts of the world. In his birth chart Uranus is conjunct Sun/Saturn (Uranus in the middle of Sun and Saturn). And that is an indication for the importance of the issue of the rebellion against limitations. 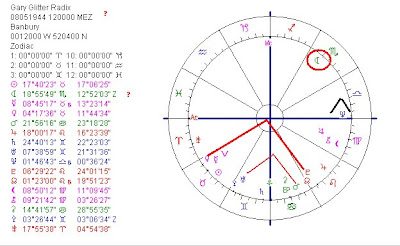 Of course, not everyone born May 8, 1944 is a born pedophile! The right time of birth, genes and circumstances will be of utmost importance.

PROBLEMS IN LOVE
There are clues, however, for problems in love and sexual life (preference). Notice:
- Venus square Pluto
- Mars semi-square Uranus
- Prominence of the Moon (oriental) for needs and children and of Neptune opposition Zero Aries: the combination for a prominent Moon-Neptune!

Moon-Neptune is just like Mars-Uranus (in the charts of males) not favorable for a long lasting relationship with a woman.

I don’t know the crucial placements or the Ascendant. Gary Glitter is an artist. So I have the idea that Venus will be crucial in his chart. That would give the Moon-Venus-Neptune combination that shows artistic talents and sense of beauty in the charts of those who have 3 or more indications for a career in that direction.
Geplaatst door Astromarkt op 10:06 AM