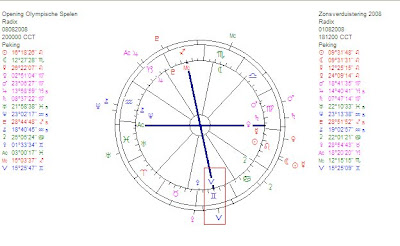 ASTROLOGY CHART OF THE OPENING OF THE OLYMPICS
The start of the Olympic Games of 2008 is at August 8, 2008, at 8 p.m. in Peking . Eight is the Chinese lucky number. In Western astrology 8 is the number of the house of crisis, changes, life and death…

The moment of the ceremonies has Venus – for style and grace – on the Descendant. Vulcanus – for brutal force in public – is on the IC. What a curious mixture of peace, design and beauty with danger on the background (on the IC). There are even rockets near the spot because there is cause for alarm.

Mars, planet of sports, is inconjunct Neptune and opposition Uranus. The Sun is biquintile Uranus. These are components for attacks, earth quakes and incidents or accidents. And for special performances (but with a ‘gloss’: there might be drugs involved, for example, or other scandal).

Of course the opening of the Olympics will be beautiful and artistic and seems to be apart from the sport in the days thereafter. But, the atmosphere at the moment of ‘birth’ will be important for the total event.

SUCCES, BUT AT WHAT COSTS?
Sun inconjunct Jupiter in the chart of the Olympics shows misbalance. It is like a doctor fighting a disease and loosing the patient: a success that only exists if you give up something in return. The Games are being held in Peking, disregarding the fact that it is an unhealthy place full of smog. China has been chosen for the benefit of other countries and their economy. China’s economy is booming and everybody wants a piece of the cake. With Venus trine Pluto it is probably a matter of gain. China promised to improve the human rights situation, but according to Amnesty the situation even got worse. The IOC has given permission to censure the internet! Chinese are not allowed to know about their situation and about what happens in Tibet.

ECLIPS
The eclipse of August 1 is in the 10th degree of Leo. That occultation has no direct connection to the chart of 8.8.2008, but there are some indirect relations. Moon of the Olympics in 12d28 Scorpio is conjunct the Midheaven of the Eclipse (12d16 Scorpio) and square Mercury of the Eclipse (12d26 Scorpio). There is also Chiron (Olympics) on Descendant (Eclipse). The eclipse is in the Sarosserie 10 South and should contain bad news with sudden change (according to Bernadette Brady). Worries should vanish and a quick solution would be shown... 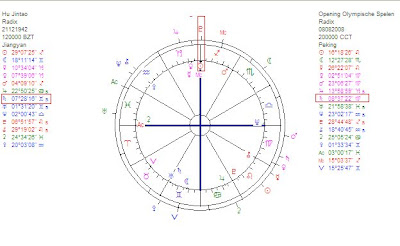 Today the Chinese president Hu Jintao asked to keep the Olympics free of politics. At the moment transit Pluto is conjunct his Sun, so politics are highlighted in his personal life.

KING ALBERT OF BELGIUM
As it happens the eclipse of today is opposition the progressed MC of the Belgian king Albert II. That could shed another light on his present position (not necessarily a bad light). TODAY he has progressed Mars conjunct Pluto, too, for a political act. If I am not mistaken, today there will be news about the future of the Belgian government (in crisis). 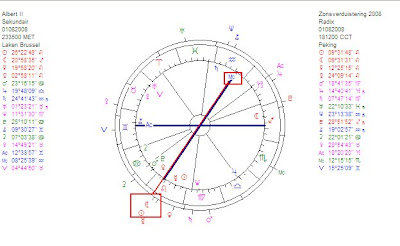