Saturn is the symbol of the end, the departure, the good-bye, the misfortune, mistakes and all other disadvantages and tests in a human life. Only with a beautiful trine of Saturn or with other very good aspects, Saturn might offer you respect, stability or a step upwards in your carreer. Transit Saturn has now ended the American dream of Dutch coach Ruud Gullit. Ruud Gullit stepped back and is not longer the coach of LA Galaxy.

Transit Saturn is now semi square his Progressed Sun and conjunct his natal Sun and Pluto AND opposition his natal Jupiter. He experiences that his club (Los Angeles Galaxy) has not been able to win the last 7 games. And that is it. Ruud Gullit has given 'personal reasons' for leaving. 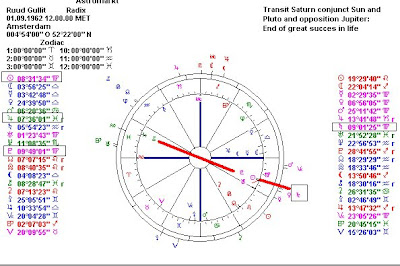 He started his American adventure on November 8. At the time I wrote on my Dutch blog 'Astrokrant:
'Ruud Gullit (born September 1, 1962, unknown time) is leaving for the USA to become the coach of Los Angeles Galaxy. This happens with Saturn conjunct his Sun and opposition Jupiter. Saturn points great responsabilities (and maybe a heavy load or mortgage). In his chart you see literally the advantage of this on the other side (the opposition with Jupiter).'

Now Saturn returned (after retrograding) and then hit Pluto.