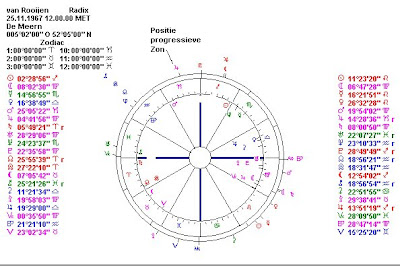 Dutch climber Wilco van Rooijen was born November 25, 1967 in De Meern. He survived a climbing the K2 in Pakistan, 11 climbers died. 'All' he suffers from is the lost of his friends and frostbite on his feet. The doctors think he will be OK soon.

Traditional astrology tells us that Saturn is for bad luck and Jupiter is the planet that makes you happy.
In 1995 he had a serious accident while he climbed the same mountain. That was when the progressed Sun changed sign and progressed Saturn retrograded to the natal position (P Saturn conjunct Rx Saturn). This time he was the one to be lucky. Transit Jupiter conjunct the Sun...Wilco van Rooijen is a Sagittarian with Moon in Virgo and Neptune oriental (ideals and visions - yes, from a mountain:) -, first. Uranus opposite Zero Aries, Venus calling...(the first thing he did was asking about his friends). I bet that Mars is angular or on top for the sport, the energy and the drive. Or it will be Uranus for the 'kick'.