OBAMA AND T NEPTUNE
symbol of the media 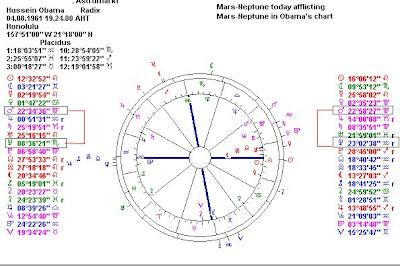 Transit Neptune is inconjunct Obama's Mars and 105 degrees from Obama's Neptune right now. In his natal chart Mars is semi square Neptune. The transit Masrs-Neptune is activating the existing aspect in Obama's birth chart (see above).

This occurs at the moment that people seem to be getting tired of the overload of 'Obama' in the media. (Neptune is the symbol of the media and of everything that you cannot really touch or have a grip on). Neptune has a top position in the chart of Obama. That shows us the importance the 'media' (television, movies, photo's) in his life. So this transit might actually hurt his imago or at least attack it until the second half of October. It is of course election time! And after all the activities of the last months, Obama might be tired of the media and 'romancing the stone', too:).

In my country there is a saying that if you want someone to get out of the life of your children, just praise the person away!:) Neptune can be a soft killer. But as long as you know it, you are in control.