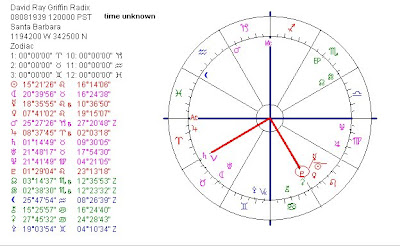 I just posted about the charts of Mel Gibson, Charlie Sheen and Adam Curry, all of them believe in a 0911 conspiracy. And then I remembered David Ray Griffin. I had something about him on my site Astromarkt, but that piece of my website cannot for some reason be published any more. Here is the refreshed story about him.

Theologist and philosopher David Ray Griffin is the leading voice in the conspiracy theories about 09/11 and a million seller author since his retirement. Without hour of birth there is no chart, but the ephemeris shows a lot of information about his birthday (8th August 1939, Santa Monica) anyway.

We see:
- Pluto (oriental) with Venus ahead of the Sun (money and politics)
- Sun at Aries Point semi square Jupiter/Neptune (beliefs, followers)
- No positions in water signs (empathy calling)
- No placements in air signs, too (communications calling)
- 70% in fixed signs (strong will, perseverance: " 9/11. David Griffin will never let this go until we get the truth."..Wikipedia quoting him)
- Combination of earth and fire (creativeness)
- Closest aspect: Saturn square Pluto (the die hard confronting people and I am beginning to believe it is frequent in the charts of those who suspect conspiracies)

And could not Saturn-Pluto be: ‘fear of politics and politicians’? Maybe it is.
Both Saturn and Pluto are connected to the Northern Node, reflecting the time he was born (just before the war). This aspect links business to power and money. And this aspect shows the controversial struggle of the scientist (Saturn is for the institute of science) against politics (Pluto), too. It is the combination of a person who withstands hard confrontations.

So what do we see? A very creative and will powered leading person with a conviction. Power, influence, politics and money come first in his chart. He is a rather tough and hard person you cannot reason with. A die-hard!
The missing elements point at specialization or being extreme and at having a focus on a certain area in life. No water, no air: social life at any level.

Strange enough his Venus is on the ascendant of president Bush (if that ascendant is 7d06m Leo). I heard him say on tele that it was possible that Bush personally was not involved in the conspiracy from the very beginning...With Venus on another person’s ascendant it is difficult not to be kind.

David Ray Griffin is a theologist. He has the Sun semi square Jupiter/Neptune. The combination of Jupiter/Neptune is also there in the chart of Gibson. Professor Griffin is publishing about 09/11 since 2004. That was the year of his progressed Mars sextile Jupiter. In 2006, progressed Jupiter was trine Pluto (for a lot of profit and success), with transit Jupiter square natal Sun for successes that do not come easy or with conflicts.When a person has a tight Saturn square Pluto, the trines with Pluto will always be inconjunctions with Saturn at the same time. In 2006 Griffin had his fortune, but he also experienced the disadvantages and the price to pay.

In October of 2006 a tape recording of Atta was found. DAVID RAY GRIFFIN (8th August 1939 Santa Barbara) will not have been happy with this discovery since he had Transit Saturn square his natal Uranus at the time. GEORGE W. BUSH (6th July 1946, 7h26 a.m. New Haven) seemed to profit from the tape. Transit Pluto was making a perfect trine with the Midheaven (MC). Pluto is the planet of the politician, but also the symbol of discovery and investigation.

PS
This time there is no date of birth starting with a 3 involved, like with Charlie Sheen and Mel Gibson:).