ASTROLOGY CHART OF LIZ TAYLOR
who is in hospital now...

Elisabeth Taylor (76) has been taken to hospital. I will have a look at the astrological situation of the moment and at her birth chart. In short: I found a lot of difficult transits of Saturn and Neptune (for being hospitalized). And I found Eros calling in her birth chart!

Nevertheless, her staff says that she feels OK and is surrounded by family, friends and precious jewels (...?*). This is her chart. 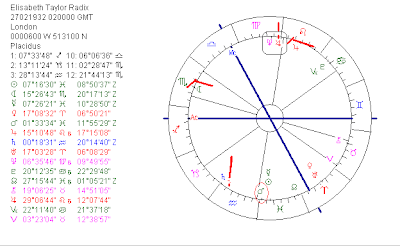 Liz Taylor is a myth. And she is mysterious (Sun Pisces and Moon Scorpio). Moon in Scorpio is frequent in the charts of women 'who made it'. And Liz made it!

NEPTUNE FOR THE ARTIST
This chart shows Neptune on top, square Ascendant. The symbol of romance, the movies, imagination, the illusions and disillusions (and maybe also alcohol) is of crucial value. For an actor empathy and the ability to feel other's sentiments, is a fortune. (Neptune's influence is of help where compassion is needed as well). Neptune is the end dispositor of her vocational routing and there is a tight semi sextile of Neptune with the Midheaven. There are only hard aspects with Neptune.

MARRIAGES
The combination of a prominent Mars and Saturn is an indication for a divorce. That also goes for Sun conjunct Mars (the aspect is wide, but the light is being translated by the square/opposition with Neptune). More subtle indications are:
- Moon in Scorpio inconjunct Venus in Aries (a misbalanced need for love)
- Venus in Aries is the weakest place for Venus
- Venus is semi square Mars in Pisces (for passion)
But the best indication for the possibility of more than one marriage is the tight conjunction of Venus and Uranus in the equal fifth house and both square Pluto. Venus-Uranus-Pluto is the combination for marriage on impulse! The combination of Venus-Uranus with Pluto and Jupiter in her chart refers to the successes that she had as an artist and as an extraordinary beauty.
The impulsive marriages are 'confirmed' by Venus' relation to the midpoints Uranus/Pluto and vice versa Uranus with Venus/Pluto.
These repeated combinations also tell us the story of falling in love again and again (Venus-Uranus) and about being jealous (Venus-Pluto). We saw more than 3 indications for a possible divorce.

SOME LIKE IT HOT
We know all about her life and the effect of the negative Neptune on top. The composition of the chart does not fit the life of ordinary women. She is too sparkling (Venus-Uranus), too driven (Pluto). On the other hand she can easily be achieved and she is vulnerable and weak. With 50% of her positions in water signs and an afflicted Neptune, she is likely to give in to bad habits.

Men may not always have been the answer to her dreams. But all of these love adventures gave her love life a boost and made it exciting. And that is what a Venus-Uranus-woman wants most of all. She likes excitement and change. And that is what she got.

EROS CALLING
I recently wrote about Eros. Eros is in 29d06 Leo in her chart and that is close to the top and semi quintile the Midheaven. And ...Eros does not make major aspects in sign or orb 5 degrees. Eros is calling! And she answered.

*) See Venus in V square Pluto in VIII and Saturn in the 2nd house for the desire to have a lot and the importance of material belongings.