I saw a video where James Randi (in suit) tests an astrologer (in costume, sigh) about the value of sun signs by giving a sort of a cold reading to the audience (another sigh). Is thAt astrology? Is thAt a test? Any chart should be read completely and in the context of a persons' gender, social situation and environment. And even that does not give 100% correct answers. A chart does not tell it all, IMO. It presents a symbolic bag of seeds, some stronger and more able to grow than others.

Has James Randi ever tested doctors? Given them a picture of a man and let them say what is wrong with that person? No doctor would cooperate with such a test. But there is always an astrologer willing to be on You Tube with the famous Randi, the man who knows all about fraud and the occult. 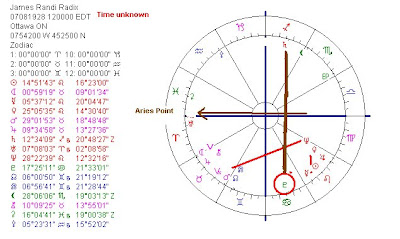 Let me read James Randi's chart. He was born in Ottowa, August 7, 1928. We see 70% of his positions in fixed signs for a strong and persisting personality. He used to be an illusionist. He has Pluto oriental (for power play, influence and money). His Mars is tightly square Neptune (working with or against the immaterial, a morph etc.). His Sun sesquisquare Zero Aries is for drawing attention. Aries Point is opposition Saturn/Pluto. And that means that he is known for being a die hard...*)

Had we not known about James Randi, without an hour of birth we can only see that he was born to persist in whatever he was doing. And that he fights or works - Mars - (with or in) the field of illusions and the amorph (Neptune's territory). But first of all he is a man who wants power and influence (Pluto). We always see James Randi himself in the center of attention (because the Sun! is prominent). And we see power games. Sun and Pluto are most prominent in his chart.

It is OK to expose any fraud who claims to be supernatural in order to earn a lot of money, mostly coming from the common man. But it is rather funny, that Randi himself makes money fighting the 'supernatural', when I come to think of it.

There is nothing supernatural about astrology. Astrology and a chart is a tool in the hands of the astrologer. And as long as not every astrologer lies about his abilities or claims to 'know it all' just by reading a chart (or by knowing a sun sign!), no James Randi can change my mind about astrology. These sort of tests just make me feel tired, sometimes.

Talking about perspectives and views, read my personal blog, Mar's Blog (an astrologer's view about the 8 points against astrology).

*)
When Saturn and Pluto join forces you get a strong concentration, a focus. Think of scientific specialists, for example, or about the heavy training of a sportsman. Saturn is the governmental law, Pluto is the law of the street (where the strongest is the winner), and so if they join eventually the law will win. Strictly maintaining ancient rules: Saturn and Pluto together! Those with both of the planets in the fourth house will have a hard and unpleasant background (but with good aspects there can be done something about or with that experience). You seldom see water in the wine with Saturn and Pluto on the label....

There is a certain 'boomerang' effect with Saturn-Pluto combinations. The slightest error in the past made during a Saturn-Pluto aspect might turn against you later, when Saturn joins Pluto again. Investigations about peoples' past bring errors to the light during a progression or transit that combines the planets and force the native to resign. Saturn brings up the disadvantages of research and investigations
More about Saturn and Pluto on my site Astromarkt
Geplaatst door Astromarkt op 10:24 AM