CHART OF THE DAY OF BIRTH OF MRS. MAYAWATTI KUMARI
shows that some are born for successes...

Some people are born on a day with special gifts. They will rise from whatever position in whatever circumstances, no matter in what caste or castle they were born. 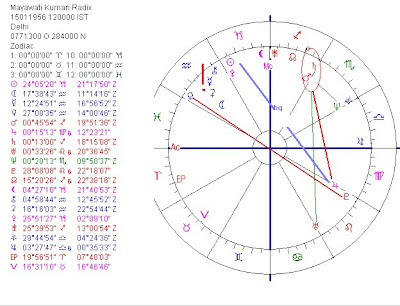 A very high rising star in political India is Mrs. Mayawati Kumari. She was born January 15, 1956 in Delhi, time unknown. She does not have a caste at all. She is the intelligent and educated daughter of a clerk and now pays more taxes than any politician in India, ever. It is a pity that we don’t have her time of birth to see what planets are angular! However, the chart of 12 noon for that day is already very illustrative.

JUPITER AND PLUTO BIQUINTILE SUN
You know that Jupiter and Pluto in combination promise success and confidence. This politician has the Sun biquintile Jupiter and Pluto!
A 'calling' Sun (i.e. a Sun without major aspects in sign or orb 5 degrees) points at drawing attention (on stage, in sports or as a leader) and she has the Sun calling in Capricorn, sing of ambition, climbing and administrations. The biquintiles give those who were born on that day a creative talent to succeed in life. I count at least 10 midpoint combinations that point at succes, even without a time of birth.

ORIENTAL MARS
There is a very tight combination of hard aspects with the oriental Mars in Sagittarius: square Jupiter and Pluto (another indication for success), conjunct Saturn and trine Uranus (for the theme of restrictions and the liberation of limitations) and semi sextile Neptune. Uranus/Neptune is square Northern Node ('meeting with people who care about the future', according to Tyl). The Mars-Saturn conjunction is also quintile Mercury and square Pluto (out of sign). She is very tough for a woman, daring to cross lines and take hard measures, making enemies in politics and endangering her life and position. She is now Chief Minister of Uttar Pradesh and is working hard against corruption.

AQUARIUS
The female planets (Moon and Venus) are both in Aquarius, the sign of liberation and emancipation or change. With Venus opposition Pluto there is a desire for money, power and influence. She became very rich (see her Venus opposition Pluto and read about the effect in the article on my site Astromarkt). There is also the possibility of heaving strong sympathies and antipathies...Venus is out of sign trine Neptune, opposition Jupiter and square Saturn. A female die hard with a lot of followers and admirers...And just as much enemies, of course.

Read Wiki about her