THE CHART OF THE DAY OF B IRTH OF UNABOMBER, TED KAZCYNSKI

Ted Kaczynski, the man who killed 3 persons and injured 29 by mail bombings, does not want the FBI to present the cabin that he used to write in. The exposition is not doing any good to his victims, he says. The terrorist has transit Saturn square progressed Saturn now. That is a moment of regret. It shows you the hard sides and disadvantages of mistakes, for example. Ted Kaczynski is known as the UNAbomber (University and Airline bomber). 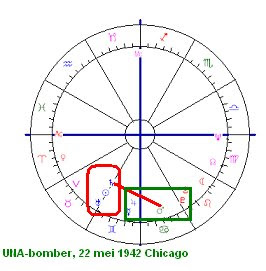 He was born on May 22, 1942 in Chicago and did not have many contacts. The time of birth is unknown. Still, the positions on the day that he was born give us several clues that in certain conditions might be leading to criminal activity:

1. Sun in Gemini conjunct the oriental Saturn and Uranus (for the limitations of independence and freedom). He had the ambition to change the world and stop technology.

2. Sun semi square Mars (on Jupiter/Pluto). He was an activist and he succeeded in his actions (terrorizing the University for 18 years! with 16 attacks).

3. Mars is also semi square Saturn and Uranus.
The semi square and other affliction between Mars and Uranus are frequent in the charts of terrorists and activists. See the article about the combination Mars-Uranus on my site Astromarkt.

Of course, not everybody born on that day became a terrorist. We don't know the crucial positions in his chart. The angular positions and the position of the Moon are unknown, for example. And the way he grew up, his circumstances and genes are important for the development of the 'bag of seeds' (the chart).

THE ARREST
The first time that he sent a mail bombing was on May 25, 1978. He was arrested on April 3, 1996, in the year that his progressed Sun was semi square the oriental Saturn. When he was arrested Transit Uranus was opposition Pluto and Transit Pluto opposition progressed Uranus. The combination of Uranus and Pluto is frequent when there is an arrest. At the same time Transit Jupiter was semi square the conjunction of Sun, Saturn and Uranus.

BRIGHT AND ISOLATED
Ted Kaczynski was a smart mathematician. At age 16 he was allowed to go to University. Mercury in Gemini conjunct Jupiter tells us about the success that he had at school. He was promising as a student. Look at Saturn rising before the Sun: he is a serious person. He also wanted to make a change (Mars and Uranus). Unfortunately he was also extremely shy and withdrawn so that he had a hard time as an assistant professor. Without reasons he left University in 1969. That was in the year of progressed Sun square Neptune, very telling! Neptune is the symbol of withdrawal and disappointment. Ted Kaczynski did not like the angry world outside. And he will spend life without the possibility of parole in jail, being locked away forever.

SATURN-URANUS
Those who read my blogs have seen many examples of how Saturn and Uranus work together to limit freedom. In the chart of the Unabomber we see this conjunction of Saturn-Uranus being repeated 3 times, by midpoint combinations like Uranus=Sun/Saturn, Saturn=Sun/Uranus and Sun=Saturn/Uranus. We could even regard the reasons for his mailing to this combination of planets. He saw (Sun) the disadvantages (Saturn) of technology (Uranus) and fought it (Mars), in his own eyes.

Somewhere in his life things went wrong when he isolated himself too much. I have read stories before of extremely intelligent people studying alone too much, without the necessary social and intellectual interaction. Human beings need to be sociable. And Kazcynski has 50% of the placements in Gemini, the sign for contacts and communications. He did not see anyone, however. And started sending letters. For years he kept killing and hurting the world outside, without having feelings for his victims, estranged (Neptune!) from the rest of human kind. Venus semi square Saturn and Venus 105 degrees from Pluto together unfortunately sometimes creates 'die hards' where sympathies are concerned.

The combination of rebellion, isolation and anger created a terrorist who acted according to his sun sign. He wrote letters.
Geplaatst door Astromarkt op 7:09 AM