THE BIRTH CHART OF FREDDIE MERCURY

Queen is going on tour. In October they will be in The Netherlands and they end the tour in Wembley Stadium in London. They made a new album, dedicated to the king of Queen, Freddie Mercury. The singer of the band and the man who moved the millions, was born September 5, 1946 in Zanzibar. I noted a 5:10 BGT birth time (source Astrothème.fr). And I very much doubt that this birth time is 'the one'. Mercury and the Sun on either side of the Ascendant, that is what I would have expected for a 'Queen' and a 'Mercury'. So I was glad that I found a 6:25 A.M. on North-Node.com. That places the Sun on the Ascendant. Mercury remains prominent (oriental, calling) and is ruler 10. Yes, maybe THAT is his chart.

However...I read the 5:10 chart and I found a Yod of Venus, Jupiter, Moon and Midheaven! And more*). 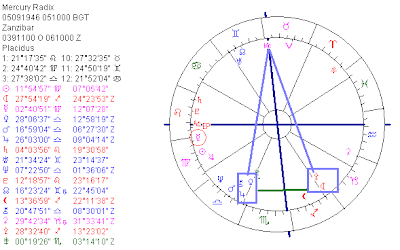 The chart shows a socialite (very communicative and busy), drawing attention with the way he behaves, maybe even because of his modesty. He is unique and controversial (Uranus is on top of it all and opposition Moon for the desire to be different from the rest of the family and social environment).
The Moon sextile Venus and Jupiter could be interpreted as being very (Jupiter) loved (Venus) by the people (Moon).

Freddie Mercury was an artist. There are 5 hard clues for this vocation.
1. Venus, end dispositor of the MC
2. Taurus MC, Venus in Libra, Venus and Jupiter inconjunct MC (YOD)
3. Yod of Moon, Venus and Jupiter with MC
The finger of successful (Jupiter) artistic feelings (Moon-Venus) points at the Midheaven (the stage).
4. Closest aspect: Moon sextile Venus = sense of beauty and esthetics
5. Neptune calling, Mercury too
Arts (Neptune) and communications (Mercury) called him to use his voice as an expressive tool.

EARLY DEATH:
There are more than one clue for sickness and death as an important issue in his life.

a. The sabian symbol of his Ascendant (22nd degree Leo) shows us an ill man in a cabin with a bird singin on the roof (Koppejan books).
BTW This reminds me of someone who always said that a 22nd degree is a fatal degree. In this particular case it was, but only in the end. Before he got ill, Freddy Mercury was a star and he will always be one of the best pop artists in the world.

c. For keeping his HIV a secret I find Saturn ruler 6 in 12.

4. DEATH
He died with the following transits:

BTW I wonder why Freddie Mercury had this artist name. Maybe he knew that Mercury was prominent in his chart and rules his Sun? Or it was (striking) coincidence.


*) What is important in his chart:
A. 50% of the positions in air signs, Sun Virgo, Moon Sagittarius opposition the Uranus on top.
B. A Yod of Venus and Jupiter with Moon and Midheaven, making a sextile.
C. 6 out of 10 placements in the chart are important and prominent.
1. Mercury oriental and calling
2. Uranus on top
3. Angular Sun
4. Calling Neptune
5. Calling Saturn
6. Moon square Aries Point