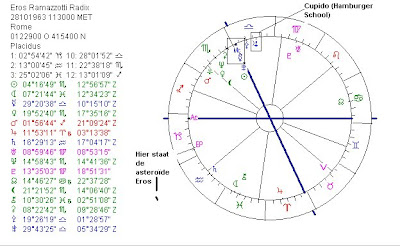 After all of the confusion about Eros/Cupid/Cupid*) last week, I had an urgent need for a real Eros. I mean his chart, of course. There is only one and that makes it easy. I am talking about Eros Ramazzotti, the singer, born October 28, 1963. Astrothème.fr says that he was born at 11. I had my doubts about that. And I found an Italian site for astrology, Astre i Gossip that mentioned: 11:30 a.m. That is better! That will place Mercury on the Midheaven and Mercury is the planet of the voice.

Eros, the asteroid, is conjunct Eros Ramazzotti’s East Point, in the first house and Eros does not make major aspects in sign or orb 5 degree. So I consider his Eros calling! And that is how they called him: Eros (aren’t astrologers allowed to joke sometimes?). His little daughter also has a beautiful name: Aurora (born December 5, 1996). The mother is Dutch (Michelle Hunziker) and they divorced in 2002.

Had you not know that Eros is the famous singer, you can find it in his chart by looking at Venus – ruler MC – quintile Uranus and conjunct Neptune. The combination of Venus with Uranus and/or Neptune is frequent in the charts of singers!

MORE JUPITER AND PLUTO
Of course it takes a willing birth chart to break through. Ascendant, MC and Moon are connected with Jupiter/Pluto. That is again 3 times success. I also counted more than 12 midpoint combination that indicates progress and success.

Jupiter is inconjunct Pluto in his chart for the price you pay for getting rich and famous. Jupiter is the retrograding ruler of the Ascendant and that brings us to his ‘being shy’.

SILENT WATER…
Eros is a Scorpio. Scorpio’s are strong in defending private territory. So is Eros. On the English Wiki you find that he should be suspicious with little real close friends. They are quoting him about his youth. As a confirmation I found the Moon in Pisces opposition Uranus and the combination of Sun Scorpio and Moon in Pisces (for being mysterious or very – Pluto – sensitive – Neptune -).

CUPID? (The one who makes you stupid?)
Yes, this was Eros. But what do I see on top of this chart? It is a prominent hypothetical Cupid of the Hamburger School, again!

*) Eros and Cupid are asteroids. In my computer program Cupid was the hypothetical Cupid of the Hamburger School.
Geplaatst door Astromarkt op 5:33 PM