THE POTENTIAL OF A CHART
and the Earthquake of Lisbon 1755

This is a philosophical post about potential, the astrologers’ pitfall and the positive idea that I got out of it all. Yes, it is Sunday!

Basically, all issues have a place in a chart. All of the possible sunsigns, planets, asteroids and midpoints have their place. The potential is there for ALL possible events. . Think about an earthquake, an accident and a wedding. At the same moment, maybe not even far away, there is a birth, a first kiss or a funeral. The chart of that funeral and of that wedding would almost be the same, like those of time twins or twins born soon after each other. And because it is possible to have a wedding and a funeral on the same time and place, there is a potential for both! Look and you will find?

THE DIFFERENCE
I started thinking that if that is so, in what way is one chart different from another? (if all is there, if every possible issue is present?) I had to think about that when I almost fell into the trap that sceptics have more than once prepared for astrologers: the chart that fits, but has the wrong moment! 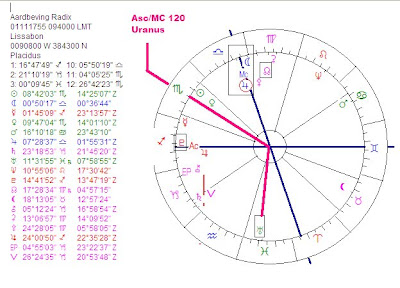 I was looking at the chart of the earthquake of Lisbon*) on November 1, 1755 between 9:30 and 9:40 a.m. I accidentally typed 10 instead of 11. And you know what? I found Saturn and Uranus both in hard aspect with the midpoint Asc/MC in the chart of October 1. And that is corresponding with a hard (Saturn) shock (Uranus), is not it? It is! Somewhere, any time there is an earthquake,, maybe even right now. And there might have been a minor shock before or after the big one. Who knows? But is sure was not a PROMINENT earthquake.

On the right moment on November 1, the Midheaven is square Pluto/Vulcanus and Uranus/Vulcanus AND square Saturn/Pluto (67.5 degrees away from Uranus!).There you are! This is a potential for an earthquake or for any disaster and something activated that potential. That activating force was Uranus. Uranus is of crucial influence down under in the chart (below the earths’ surface, on the other side) and is trine the crossing point of horizon and meridian of Lisbon. Uranus is the planet for a shock. Pluto is conjunct Ascendant for power. Moon is on the Midheaven and opposition Zero Aries is indicating the floods and is right in the middle of the combination for use of power (Mars/Pluto).

So on the specific day, we see the prominence of Moon, Uranus and Pluto (angular/crucial). Saturn calling (no major aspects in sign or orb 5 degree) in Capricorn points at the serious side of the event. And Jupiter on the MC tells us that the earthquake was great. Jupiter is ruler 1 and on the MC. This event became a famous event. As the capital of Portugal was on the right place and candles were burning because of All Saints (maybe symbolized by Jupiter) the city was struck AND burned down until the flood came. About 40.000 persons lost their life!

I don’t want to be cynical, but it is a fact that Lord Byron was right about astrology and the ‘pitiless, passionless eyes, Cold fires, yet with power to burn and brand, His nothingness into man’. When a disaster of nature force happens, you will not be compensated and you cannot blame any of these stars and call them to the courtroom.

MY CONCLUSION
What I learned of those two charts (the one of October 1 and the event’s chart) is that there is a potential in each chart. But some of the potential is prominent and ‘shows off’. Other potentials might have grown in the right situation but could remain unused. Everybody can be a potential killer. But in certain conditions (a nice environment, nobody around whom you would like to kill, good genes), you may never use that potential. Even if a person is very aggressive there is a way out (working hard, sports, the army, therapy, hunting…). Suppose that you are a potential singer, but you do not have good looks…If you don’t happen to be the cousin of a manager in the music business and you don’t have the money for plastic surgery, you will have to keep singing in the bath room. But, in the right conditions and provided that you can playback, you might make it. I have written a little book about the way to find the natural potential (Astro I.D.) by looking at the most prominent lights and planets.

PS The idea that you can become anything you want is not correct, of course. It would take a lot of tablets or pills to make a craw sing. But within the potential that you have, you have various possibilities. And that idea might be the power of positive thinking!


*) My interest in this earthquake is easy to be explained. I was reading a city guide of Lisbon (where I will be in September, see on the left side of this blog).

Interesting article and yes there is always potential. I see the chart like our genes with many possibilities but some more likely than others. Glad I discovered your website. I can't believe I will miss Noel Tye in Lisbon! Arggh! I am going over there in October! To bring two of my favourite things together (Lisboa and Astrology) would have been perfect.