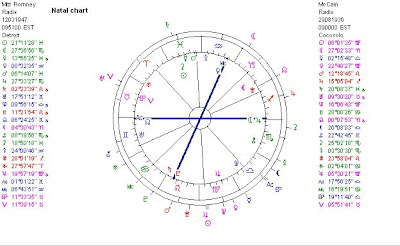 Mitt Romney seems to be the best Republican candidate for the vice-presidency. Rumors say that McCain will soon announce his appointment. Within 3 days, transit Uranus will be exactly conjunct his Sun and semi square the MC with transit Neptune square Jupiter. As Uranus is the ruler of the Midheaven in Romney's chart, it will be days of crucial importance, whatever he decides to do.

Romney was, like McCain, a candidate for the Republican Party. On February 7 Mitt Romney stopped the race. That was with Transit Saturn inconjunct his Midheaven and opposition Mars. Also transit Jupiter was inconjunct Pluto. I mentioned at the time that distances of 150 degrees (inconjunction or quincunx) tell us to 'give up on something'. That is mostly provoked by a misbalance. In February Saturn was at a very low spot in his chart. Now Saturn has passed the 'deep valley' of the IC and is climbing upwards again.

Romney has several angular (crucial) placements. Venus, Pluto, Moon and Jupiter are conjunct the cross of the chart.
a. Mars is on top, calling and oriental for the entrepreneur.
b. Venus (diplomacy, charm and talents) on the Midheaven.
c. Pluto (politics, strategy) on the IC.
c. Moon and Jupiter (popularity and support) on the Descendant.

We see the potentials of success and popularity and the financial axis on the meridian. If we take Ceres seriously (and why would we not?) Ceres is rising before the Sun and important in his life. Ceres is the symbol of nutrition, inheritance and agriculture. I think Ceres also has something to say about following into the footsteps of a parent. I read that Romney's father was a business executive and former Governor of Michigan. He idolized his dad (says Astrodatabank).

In the astrological profile of USA presidents I often found Moon-Jupiter aspects. Romney has the
Moon conjunct Jupiter (exactly, within 3 minutes of orb). What he does not have (and most of the others do have) is the combination of Mercury, Saturn and Pluto for the 'chess player''s mind.

With 50% of his placements in water signs, Romney is likely to be a loyal person. The Venus-Saturn opposition of McCain is in close aspect with Romney's Sun, their Moons 'get along' and Romney's Jupiter is sextile the Moon of McCain. But his Mars is opposition McCain's Sun. And that might be a reminder for those days that Romney was fighting to become the candidate that McCain is today. Also McCain's Sun is inconjunct Romney's Midheaven, so that there might be a mismatch between the leadership of John McCain and the goals of Mitt Romney. And yes, he gave up and John McCain became the leader:) 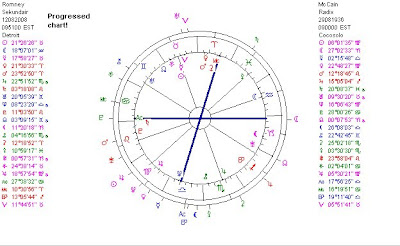 In my post about the charts of Obama and McCain, dated July 6, 2008, I wrote about McCain:

"Mr. McCain did not become a general, like his father and grandfather. But he is ambitious (Moon in Capricorn), obsessively (Sun quindecile - 165 d - Saturn). And the tightest aspect in his chart is Moon opposition Pluto. I suppose that he is very demanding and not easily to be persuaded. His experiences in situations of danger of course changed his personality in a dramatic way."

His strong personality (Moon-Pluto) is right now pushing the progressed horizon of Mitt Romney. Maybe he is trying to persuade him to be his second man?

Electoral compass, for those who have not made up their mind, yet:)

ASTROLOGY OF MEETING and GETTING TO KNOW EACH OTHER.
People meet or get to know each other at the moment that they share the same kind of situation or period in their life. Both partners are at the same time searching for happiness or are sharing a good or bad moment and that 'connects' them. At least, you would think so when you see their progressed charts!