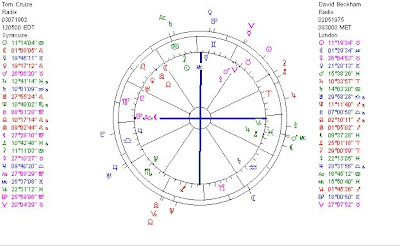 David Beckham helped Tom Cruise to lose weight. In 6 weeks he lost 6 kilo! That is nice story of friendship, is not it? There are many links between their charts and they have mutual Sun-Jupiter connections. Jupiter is the planet for coaching, support and help. Jupiter also happens to be the symbol of growth (in any direction).

With his progressed MC inconjunct progressed Jupiter Tom Cruise had a 'fat imago', a misbalance (inconjunct; for success, but...) between condition and success. The progressed MC of David Beckham is now sextile Venus and that is nice:)

MORE:
About David Beckham and George Clooney
About David Beckham's natal chart
About Tom Cruise and Scientology
About why we are 'fat' and what part of the chart we can blame for it
About sharing aspects
Geplaatst door Astromarkt op 6:51 AM