OBAMA AND BIDEN RUNNING TOGETHER
Golden choice!
eh...like The Bundies?

Barack Obama's running mate is Joseph Biden.Let us see what their charts tell us about the way they will be cooperating. 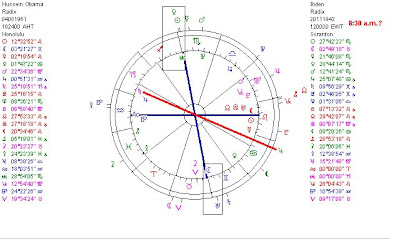 Joseph (Joe) Biden was born November 20, 1942 in Scranton PA at 8:30 a.m. (birth time unconfirmed, found it on the site of the Reluctant Astrologer). The official birth time is unknown.**)

JOE BIDEN’s NATAL CHART
Joe Biden is a Scorpio with a Moon in Taurus (unless he is born in the night). Mars is very important in his chart (oriental, probably no aspects within 5 degrees - unless born at night -, and Sun 15d from Mars). Joe Biden must be a man with a strong drive. With Uranus on the Descendant (for 8:30 a.m.) he would be the kind of person who wants to make changes (just like Obama – with a calling Uranus - says he wants).

What I miss in the positions on his day of birth is a close, tight, exact aspect. The only major aspect that is within 1 degree of orb is Sun conjunct Venus. And we see Moon inconjunct Neptune in the chart for 8:30 a.m. (but: that is not a confirmed chart). He is a real defender. Fifty percent in water signs, sixty percent in fixed signs: he cares and he goes for it. With Aries Point oppositon Mercury/Pluto he must be known for having strong opinions and dito mentality. Without HOB there is not much more to say. So let us focus on the interaction with Obama's chart.

The Saturn of Obama is opposition the Jupiter of Joe Biden. The Moon of Obama is conjunct the Descendant of Biden (for 8:30) and Mercury trine the Ascendant of Biden. Venus of Obama square Neptune of Biden. Sun of Biden square Node of Obama. They do not have matching sun signs, moon signs or Mercury's. The choice for Biden must have been based on other terms than 'feel goods'.

The Saturn-Jupiter conflict is interesting. The convictions of Biden might me in contrast with the ambitions of Obama and Obama tends to limit Biden's progress in life or ...to give it the constructive basis that is needed. One in the role of the man in charge (Saturn) and one in the role of the coach (Biden), but sometimes they might have quite different views. I hope that Obama will accept his advices and that they are able to keep the balance in ups and downs.

Is it a fortune that Obama's Moon is conjunct Biden's Uranus and descendant? This combination might awaken certain habits and reactions in Obama and one never knows which, because Uranus is surprising. The combination will be stimulating, sometimes colliding.

GOOD CHOICE
With all that in mind there are two crucial angular hits: Sun and Venus of Biden on the Midheaven of Obama. It is a golden choice. Biden embodies (Sun) the goals (MC) of Obama. And Biden is good (Venus) for the ambitions of Obama. His Sun shines on Obama's social position. Obama on the other hand has realized a true wish of Biden. Both will personally benefit from the relationship.

What Obama and Biden (if not born in the night) share is Moon square Pluto, so both are strong personalities. In my article about sharing aspects I wrote:
"….is a challenge for daily life. Two little tyrants wanting to have it their way, to eat their favorite food! But they are a closed front when in trouble. A bit like the Bundies! "
We are talking about politicians here. Pluto is the planet of politics and strategy. They do not have to live together. And together they are strong! Like the Bundies:)

YOU MAY ALSO BE INTERESTED IN:
The article about Obama's chart
or other issues about the Elections (see Labels)...