ASTROLOGY CHART OF DIEGO HYPOLITO AND THE SAD OLYMPICS 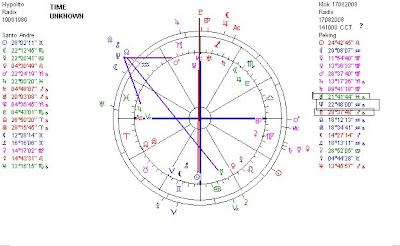 One of the stressful things about sports and games is that one has to succeed in THAT particular moment in time. That goes even more for the Olympics (a once in the 4 year opportunity)!
For all of the competitors it must be no fun to loose. Sometimes it is just dramatic. At those times heavy progressed aspects and transits show how the chance for gold or even bronze has been undermined.


What kind of bad luck did Diego Hypólito have today? His Olympics fell into the water when he fell during his performance.

Hypólito is born 19th June 1986, 22 years old and Brazilian. Early 2008, he got infected by Dengue fever, just like over 55.000 more Brazilians living in the region of Rio de Janeiro. In spite of that, he decided to compete in Peking, anyway. Maybe his physical conditions had been affected by dengue. That makes it even sorrier that he lost this way. Here you see the list of hard aspects valid for his chart right now:

All these are difficult aspects. It is not uncommon for a top performer to have hard aspects when there is tension. But these above are frustrating AND the two inconjunctions point at a loss. Another bad sign is that there are barely pleasant transits or progression at the same time.

(BTW the actual Mars and Pluto were tightly square at the moment of his performance! There was a strong drive to win and the level of stress and adrenaline was high. Shortly later there was a winner.)

Hypólito's gymnastic skills are partly genetic. His sister is also a top gymnast. In his chart we see Mars tightly sextile and Mercury trine the oriental Jupiter for international successes and intelligence. His chart has a 'calling' Sun (for performance, leading or drawing attention).
These important planets (Mercury, Mars and Jupiter) were inconjunct and semi sextile transit Neptune today. The deception (Neptune) has affected the most important combination of aspects in his chart. And with that: his positive and active mental condition.

There may be much more to say about Hypólito, but I leave it with this impression of the sad day in his life as a sportsman. And I think that there is hope for him for a 'next time'. In 2012 he has progressed Sun sextile progressed Jupiter and natal Jupiter. Even if he does not do the Olympics in 2012, he will make progress in life.
Geplaatst door Astromarkt op 2:49 PM