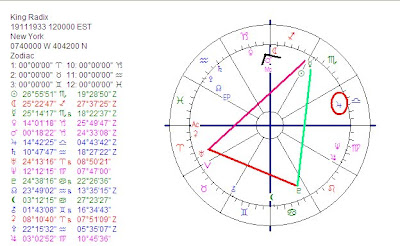 Even though Larry King's program on CNN has a lot of 'spiritual' items, he has not (yet) revealed his hour of birth. Or maybe it is BECAUSE he is spiritual? He may behave as if he is open and positive, as a real Scorpio he knows what has to be defended.

Let us look his chart and at the prominent placements of that chart. He was born 19th November 1933 in NY (Brooklyn). We don't know the angular positions, but we can still see what planet is oriental or calling or related to Aries Point. Mars and Jupiter are the most prominent planets on that day.
Mars is square Aries Point and most probably Mars does not make major aspects in sign or orb 5 degrees: in which case Mars is calling! Jupiter is the oriental planet. He is famous all over the world, a real international. Mars and Jupiter have a distance of 75 degrees so that the combination of success joins forces in a rather obsessive way. He just had to be a success and he is. That is the first thing that comes in mind.

CHANGE YOUR MIND...
The tightest aspects are Mercury trine Pluto (for the power of the word) and inconjunct Uranus (for the possible misbalance of the news and his opinion, maybe:) with Uranus square Pluto. This combination forces a person to immediately have an opinion or make up the mind (or change the mind...:) and often that is difficult...This combination of Mercury, Uranus and Pluto is really mind changing! (And the Uranus-Pluto square is indicating a major change, such as an arrest...)

The reason that the name of Larry King caught my eye is that there is a lot of talking about his latest programs about UFO's and spiritual subjects (I saw a title 'Change your mind, change your life'). I see that transit Neptune is trine his progressive Jupiter now. I can only hope that when the moment comes that he starts discussing astrology, it will be with the best astrologers available. Go for it!