THE CHART OF THE PRESIDENT OF GEORGIA, SAAKASJVILI 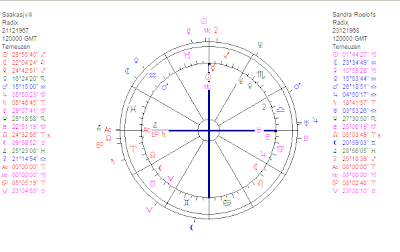 In January this year I wrote about the president of Georgia (on my Dutch site Astrkrant.blogspot.com). That was because he had been elected and because his wife is Dutch (just like I am). Now that there is a war going on and Russia intervented, it might be interesting to have another look at his chart. Above you see his positions and those of his Dutch wife on the outside. Just like at the time of the elections, transit Pluto is now conjunct his his Sun and square Uranus. It is a hectic transit, pointing at possible revolutions and arrests. That is why I wrote this in January (quick translation:)

"Michail Saakasjvili - like his wife Sandra - has Neptune oriental. His Sun is square Zero Aries. And Zero Capricorn is right in the middle of their Suns. It measn that they will experience transit Pluto conjunct their Suns this year.

That (Pluto conjunct Sun) is a big challenge, it might include danger and it will change their lifes! I think that the results of the elections will have something to do with it in the first place. Because today*) transit Pluto is conjunct Saakasjvili's Sun and square his Uranus. That is just like in his solar return! This combination (Sun-Uranus-Pluto) is the recipe of major change in life (sometimes, BTW, in the shape of an attack or an arrest).

In the natal chart of the Georgian president the Sun is square Uranus (for the will to change the world), Jupiter is inconjunct Saturnus (for the advantages and disadvantages and vice versa). He is an idealistic man full of passion (Venus squre Mars). His opponents say that he wanted to change the country too fast, they suspect corruption and they think he is helping his friends to gain more than others. He silenced his opponents by destroying a television station. Yes, Pluto sure did his work well!:)

Sun, Mars and Zero Aries related to the midpoint Saturn/Pluto tells us that he is a 'die hard' and that the issue of political damage is a theme in his life. Mars with Saturn/Pluto regulary points at the danger of violence. In politics this combination warns for a heavy power struggle. Sun and Mars are prominent in his chart and that is why he became a leader and entrepeneur."