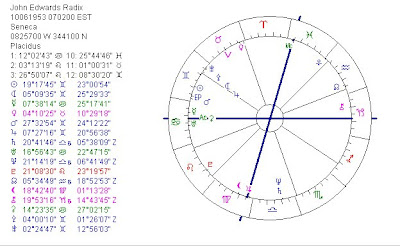 Remember my Eros-post (and the mix-up with the hypothetical Cupid)? I wish I had not deleted it. In the chart of John Edwards, born Jun 10, 1953 at 7h02 in Seneca we see an angular hypothetical Cupid! At the moment transit Neptune is square his progressed Midheaven and transit Saturn inconjunct progressed Uranus. Time for a revelation, is not it? He 'confessed' that he had an affair in 2006.

Edwards has Sun and Moon in Gemini, Jupiter rising before the Sun, Venus (!!!) calling and in the tenth house (not making major aspects in sign or orb 5 degrees). It is easy to see that he is a successful man, able to convince with charm and diplomacy. He is also a man who knows how to convince women... He must have had many female supporters. Another angular position is for Uranus, the planet for those who want to change the world to make it look better in their own eyes. An angular Uranus is a crucial Uranus. Independancy must be of crucial importance in his life. So are surprises!

Notice that Venus is calling and Uranus is angular (crucial), so that the combination for love affairs is highlighted in his chart. He is good looking and attractive for many women. I guess he was not 'safe' for the approach of women:)...

The other side is that his wife suffers from cancer (Moon sesquisquare Saturn - ruler 7 - and Neptune). This afflicted Moon in Gemini is also 75 degrees away from Pluto. The 75-degree aspect is somehow related to health issues, in my own experience. The fact that it is not John Edwards, but his wife who is ill makes one wonder about the meaning of the Moon in the chart of a male. With the Cancer Ascendant Moon rules his first house. You would expect physical conditions related to Saturn-Neptune, too. Health issues seem to be an important issue in his life.

NEPTUNE-MC
In 2006 he denied the affair. That was with the progressed MC inconjunct Saturn (ruler 7) and Neptune (ruler 10) and square Pluto (ruler 5). You see the misbalance in marriage, the difficulties to keep the position and the public scandal. Now, with T Neptune square the progressed MC, it all comes back again.

PROTOCOL AND LIMITATIONS
In the description of his character on Astrodatabank I read that Edwards has little regard for protocol. Protocol limits freedom and forces us to follow certain procedures and to stick to the rules. There is a connection between NOT following the official rules and Saturn-Uranus. Saturn is his ruler 7. Uranus is square Saturn and ruler 8, conjunct the Ascendant.

At the moment T Uranus is exactly inconjunct progressed Saturn, ruler 7, activating the issue of crossing the line. Nobody would have mentioned his affair, had not he been the running mate of John Kerry. In June 2004 Transit Saturn was conjunct Uranus and in July 2004: Solar Arc Uranus semi square Saturn. That year 2004 was the moment that his freedom was limited and he had to stick to the rules for the sake of his position. Saturn's aspects will be presented as a 'gift' later, wether you like it or not.

BTW Saturn-Uranus is not only the combination of limited freedom and restrictions. It is also the combination of the revelation (Uranus) of a mistake (Saturn). That is another reason why this combination (in transit or progression) is so frequent in the charts of those who enter jail.

PS I always wonder why there is so much interest in the private affairs of politicians in the USA. On the other hand I have the idea that being trustworthy includes family life. A man, who is able to lie to his wife, can be a liar everywhere. That is good to be a perfect politician! You cannot be a politician if you are unable to keep silent when you have to. And I have not seen a completely honest politician who made it to the top, yet.

Mr. Edwards was selected to be the vice-president of the USA. Many Americans voted for this man. But Kerry lost and so did Edwards, in 2004.