CHART OF ANGELIKA MERKEL WITH SUN SQUARE NEPTUNE (!)
...like Barack Obama has... 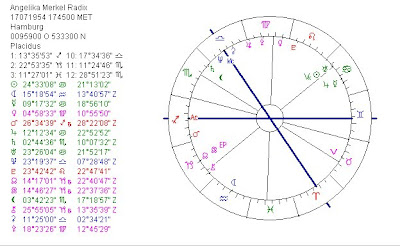 Angelika Merkel has been named the most powerfull woman today. I have payed attention to her chart before - click here - and I won't repeat that. I only like to point at the square between Sun and Neptune in her chart. That is the same square as in the chart of Barack Obama. Angelika Merkel is admired for the way that she does her job, not only in Germany, but all over Europe. And that is so since she became a prime minister. When? Wen transit Pluto was inconjunct her Uranus and trine natal Pluto, for a radical chang in her life. I thought,given the controversy about the Sun-Neptune aspect in Obama's chart, that it would be good to show a politician with this aspect and doing fine:)
Geplaatst door Astromarkt op 4:02 PM