Gloria Estefan will be celebrating her 51st birthday in the harbour of Rotterdam (The Netherlands), on Tuesday, September 2. She was born September 1, 1957 in La Havana, Cuba. Even googling 'carta astral Gloria Estefan' did not deliver an hour of birth, so we will have to read the chart of the day for noon. 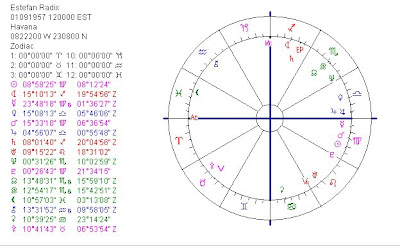 On the day that she was born Pluto was oriental. People with Pluto rising before the Sun are strategically, influential and 'political'. They know how to get into contact with the right kind of people. Politics is of importance in the life of Gloria, since her father - body guard of Batista - had to run to the USA when Fidel Castro became the comandante of Cuba.

Jupiter is the 'calling planet'. Jupiter refers to traveling and 'abroad' and she lived almost all of her life in the USA. In my country she is rather popular and on September 5 there will be a performance in Rotterdam. The coming year her progressed Sun will change sign and that might mean that she is changing her life-style.

BTW, the combination of a prominent Jupiter and Pluto tells us that she will be successful or will try to earn a lot of money (Venus semi square Pluto, too!).

A very important aspect in her chart is the tight square of Sun and Saturn and the Sun semi square Uranus (exact). This symbolizes the issue of limited freedom or the rebellion against limitations. Not unusual perhaps in the chart of a person with a forbidden native country, but there is another possible meaning: something physical that is causing limitations. On March 20, 1990 she had a very heavy car accident and she had to recover for a year. The accident occurred wit:
Transit Saturn sesquisquare Sun
Transit Saturn semi square Saturn
Transit Uranus trine Sun
Transit Uranus inconjunct Uranus

These transits activated the existing combination in her natal chart.

But where is the singer!? I almost forgot to mention that Mercury is also 'calling' (not making major aspects in sign or orb 5 degrees). And Mercury is the symbol of the voice and communications.

Still, without an hour of birth (HOB) you can hardly see the artist in the positions on September 1. It would have been easier if she had Neptune on the MC and Venus on top, square Ascendant, for example, but we won't know, I am afraid.

I like to tell you a 'chiste' (a joke) that I found on a site called Postal de Cuba.

Translation:
Fidel goes to his astrologer and asks him:
- On what day will I die?
- Comandante, it will be a national holiday.
Geplaatst door Astromarkt op 6:19 PM