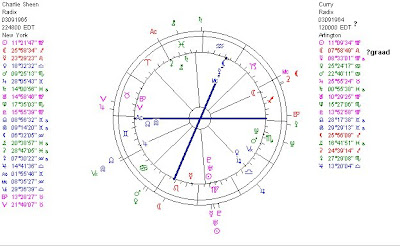 Adam Curry was born on September, 3 and so was Charlie Sheen. Both have a strong believe in complot theories, for example about 0911. In this post you find more about the way that their charts look alike. 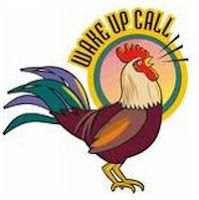 Your Wake Up Call; is the program presented by Adam Curry on Arrow Classic Rock. Adam Curry is presenting the program from the UK and it is broadcasted in Holland. Adam Curry talks in this program about UFO', a supposed to be increasing amount of earth quakes and 0911.

Curry was born September 3, 1964 in Arlington (Washington), USA. There were no placements of Sun, Moon or planets in air signs on that day. That makes us think about communications. It might be one of the reasons for his profession. He has been a disc jockey and he is a businessman on the internet.

With the Sun involved in combinations with Mercury, Uranus and Pluto, it is no wonder that he talks a lot about theories that lead to intense differences of opinion and well known radio programs:). Moon in Leo is calling and so he managed to get attention. His prominent Saturn and oriental Pluto with Sun quindecile (105degrees) Jupiter and conjunct Pluto symbolize the succesful 'die hard' in business.
The Sun with Uranus and Pluto gives a strong drive to change the world, or 'make it better'.

3 SEPTEMBER
All in all, September 3 1964 seems to have been a perfect day of birth for an emotionally involved 'star' with strong and controversial opinions. In the book 'The power of birthdays, stars and numbers" they speak of creative power.

I think it is amazing that Charlie Sheen was born on the same day in September (3), because Charlie Sheen also believes that the Twin Towers have not been destroyed by Osama bin Laden. And there are more similarities in the natal charts besides the degree of the Sun.
On August 1 and 3, 2006 I wrote about MEL GIBSON AND CHARLIE SHEEN and their ideas about September 11. I start with Mel Gibson and his beard:), just for fun.

MEL GIBSON AND HIS BEARD
A little surprised by the long grey beard of Mel Gibson (also read the messages below) I looked for an explanation in his chart and found one. His natal Sun in Capricorn (associated with the goat...) is in exact opposition with the Ascendant.
(...)
1st August 2006
MEL GIBSON, CHARLIE SHEEN AND THE COMPLOT THEORY OF 9/11
(...)
Together with Charlie Sheen he (= Mel Gibson) supports a movement in the USA that has a complot theory about 9/11. Not the Arab intruders did 'it', it must have been the CIA or even Israel. You might wonder what these two actors have in common to get the same sort of ideas (...): Saturn-Pluto!

Mel Gibson is born January 3, 1956 at 16:45 in Peekskill USA. He has Sun in Capricorn semi square Saturn and sesquiquadrate Pluto. Also Saturn squares Pluto.
Fellow believer in conspiracy is Charlie Sheen, born 3rd September 1965 at 22:48 hour in New York (both of these data given by Astrotheme.fr).
Charlie Sheen has Sun conjunct Pluto (and Uranus) opposed to Saturn and so Saturn is opposed to Pluto. In both cases there are midpoint combinations with Saturn and Pluto involved.

The actors share more, among which Mercury square Neptune (a misty mind and fantasy fighting facts). Maybe that is good for actors (they can imagine facts for their job), but not for conspiracy theories. They do share even more: Mel Gibson has Mars conjunct Saturn, Sheen has a trine. Mel G. has Venus quintile Saturn, Charlie Sheen has a biquintile. They also share the Moon tine Mercury.

Interesting to see is that Charlie Seen has a lot of midpoint combinations involving Jupiter and Neptune, the combination for actors, religions and mediums: success with the unseen or fictions. Mel has Moon with Jupiter/Neptune and Jupiter with Moon/Neptune: fantasy unlimited and popular idol.

Saturn is in top of his (=Sheen's) chart (above all a conservative!) but a radical as well (Sun with Uranus and Pluto) (...)

How to interprete the fact that they both have these strong connections of Sun, Saturn and Pluto? The tendency to stick to a point of view no matter what, and to seek the harder kind of confrontations might be something they share. Or maybe they are just afraid of authorities and the imagination does the rest?

In the mean time, those who believe that ‘Skull and Bones’ organised an ordeal to make a brave new world, are convinced that it was no coincidence that Mel Gibson was arrested even though he said he was wrong…"

SATURN-PLUTO with URANUS-PLUTO for CONSPIRACY THEORIES?
As it happens, Adam Curry also has a combination of Sun, Uranus and Pluto in his chart. Pluto and Saturn are prominent in his chart (Pluto oriental, Saturn without major aspects in orb or degree). He shares this pair of combinations with Mel Gibson and Charlie Sheen. The combinations refer to a a very outspoken and controversial opninion with hard confrontations. As far as I know, Adam Curry is not afraid to confront people with his sometimes excentric ideas.

And as it happens, too, Mel Gibson, Adam Curry and Charlie Sheen were born on a '3-day'.

PS
As per September 1, 2008 (within a day after the message in the papers) Arrow Classic Rock stopped the program with Adam Curry. Too many listeners had complained and even started anti-Curry sites. T Saturn square Sun in action...