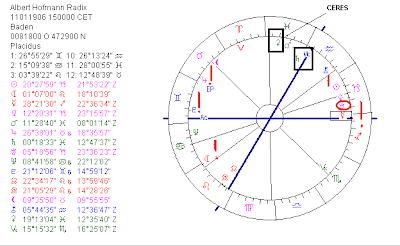 Albert Hofmann discovered the psychedelic drug LSD. He was born 11 January 1906 and died 29th April 2008. I like to point at the placement of the oriental Uranus, that I often notice in the charts of those who become very old.

FIVE planets are drawing attention and work at any possible level to get it. Notice that Jupiter-Pluto is involved and where Jupiterand Pluto are together, succes is near. Mercury is the most prominent planet, being on the descendant (crucial). Mercury is symbol of communications and transmitting messenges.

URANUS: TO INVENT AND TO IMPROVE
Uranus is the planet of those who want to change the world, mostly to make it a better place. Uranus is also the symbol of being ahead of time (and knowing before the time is there). That is why Uranus is also connected with astrology.

Uranus is oriental in the chart of Hofmann. In my book Astro I.D. I mention several examples to illustrate the contribution of an oriental Uranus to the length of life. Hofmann is another good example. He became 102! More about getting old...

MC-ROUTING: SATURN
Aquarius (changing the world, techniques), Uranus in Capricorn, Saturn in Aquarius, Neptune in Cancer, Moon in Leo, Sun in Capricorn and...back to Saturn. Saturn is close to the MC This planet shows that administration, managing, control, hierarchy, rules and limitations, science and a certain age are part of the carreer. Hofmann was a scientist.

LSD = NEPTUNE AND CERES (DRUGS AND GRAIN)
Neptune symbolises drugs and medications. In 1938 Hofmann discovered LSD. His progressed Sun was sesquisquare Neptune then. And the progressed MC was conjunct Ceres, the dwarf planet on top of his chart. Ceres is the symbol of heirdoom and grain.