THE COME BACK BIRTH CHART OF TINA TURNER 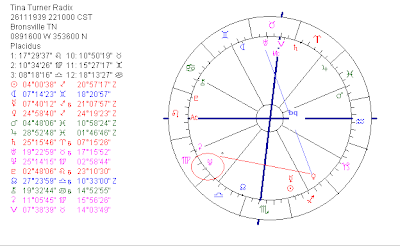 Like a jumping Jack Flash Tina Turner keeps coming back on stage. On October 1 this year she will start a tour in Kansas City. The transits tell us that it will be a happy start (transit Jupiter square progressed Ascendant and transit Uranus conjunct Venus: a sensational feeling...) but you also see that the come back might cause frustration and pain and might even be more or less 'forced' (transit Pluto semi square Sun).

FOREVER YOUNG?
She still shakes the stages and the audience! Born 26th November 1939 at 22h10 CST in Bronscville Tenessee, Tina Turner is already 68. Her oriental (= rising before the Sun) Neptune is square Venus in Sagittarius and Venus in Sagittarius is connected to a 'calling' Uranus (in a creative biquintile). The combination of Venus and Uranus is frequent in the charts of modern artists and Venus-Neptune combinations show a certain artistic talent. Also notice the Moon in Gemini, sign of youth...

IKE TURNER
Tina started her carreer singing with husband Ike (5 November 1931 - 12 December 2007). More about the violent relationship with him can be found in message, written when he died.

COME BACKS
A little more about comebacks and the Pluto influence:

Bob Dylan (born May 24, 1941 in Duluth MN at 21:05) has a calling Venus conjunct Moon in Taurus and Jupiter. Neptune is on top of his chart. In september 2006 he was a number one hit in the USA again right after a transit of Pluto conjunct the Midheaven and with transit Uranus on the Ascendant (for a revival).

PLUTO
Pluto is the symbol of a profound change of reputation or situation (status). With the ascendant Pluto could transform your relations and with Sun Pluto might change your fysical health the hard way (and make life lived more intensely).