GREENSPAN AND BERNANKE:
Who is in charge? 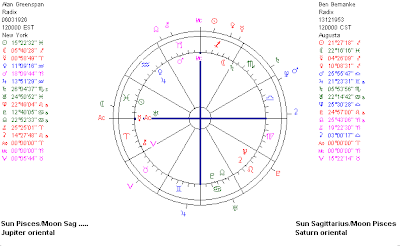 Alan Greenspan keeps doing his old job. Every now and then he warns for a recession, and he does not seem to have much confidence in his successor, Bernanke, even though they both have a combination of Sagittarius and Pisces in their charts. This combination of Sagittarius and Pisces is symbolic for speculations (and for everything that one can be convinced of, without seeing it). They might have succesfull visions, too.

Two years ago Alan Greenspan stopped (did he?:) and Bernanke took his place.

Greenspan was born in NY on 6th March 1926 with Sun in Pisces, Moon Sagittarius and Jupiter rising before the Sun. Mercury is on Aries Point, and calling! Maybe that is why he cannot stop publishing (Jupiter) his ideas (Mercury).

Bernanke was born 13th December 1953 in Augusta, with Sun in Sagittarius and Moon in Pisces. In his chart Saturn is oriental. Mercury, Venus and Saturn are calling. He is much more carefull and less open than Alan Greenspan is. Transit Pluto is now semi square his progressed Sun and transit Saturn opposition progressed Mercury. It is a statement for meeting challenges and bad messages.

I think it is rather amusing how Greenspan does not seem to be able to step back in favour of Bernanke. Or should they work together as one? I wonder...