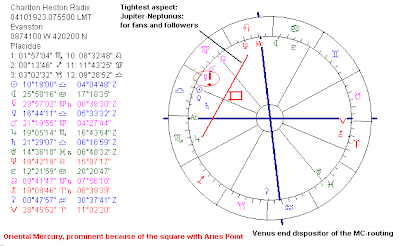 When he died I wrote about Charlton Heston, based upon his birth in 1924. But now I see that the Times and Astrodatabank (both reliable institutions) metion that he was born in 1923. Look at the two charts and see the differences. Or should I say, the possible matchs?:)

Because unfortunately in both cases there is a artistic talent and in both charts Pluto is in the 9th for a change of conviction.

In the 1924 chart Saturn is crucial (places on the Ascendant) for the conservative. In the 1924 chart Neptune is oriental (for the idealist and ...for the media) and in the 1923 chart Mercury is much more prominent (for communication).

The 1923 chart has no placements in fire signs. I think that makes fire 'calling'. Heston was very much in favour of the right to carry guns and that could explain...

With such differences in dates of birth it is very hard to read a chart. But in short:

1924
the Astro I.D. for 1924 tells us about a person who is crucially conservative and a business man but full of passion (Venus opposition Mars) with an idealistic orientation (a material man in an immaterial world:).

1923
the Astro I.D. for 1923 is that of a person who is first of all a communicator (speaking, writing) with an energy and agression at any possible level (no fire).
For some reason I keep preferring the 1924 chart:) So I looked for more...

VENUS AND HORIZON
In the 1923 chart, the solar return chart for his birthday last year had Venus on the descendant (rest in peace...) and the 1924 chart had a solar return in 2007 with...Venus square Ascendant and Uranus on the IC. Can you make a choice? I cannot!

PLUTO AND SUN
The 1924 primary chart offers Pr.Pluto conjunct Sun in January. In that of 1924 this aspect occurs in July 2007.

It makes me think that it is no wonder that these data were mixed up all of his life...

Email ThisBlogThis!Share to TwitterShare to FacebookShare to Pinterest
Labels: entertainmant, Life and death