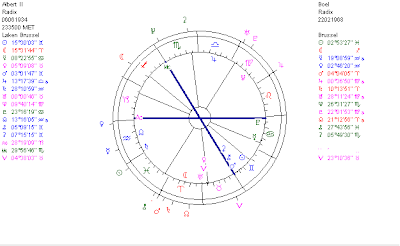 Delphine Boël is the not recognized daughter of the Belgian king Albert II and his mistress Sybille de Selys-Longchamps. She has written an autobiography about cutting the ties and recently presented the book to the press, rather bitter about her natural father. Transit Saturn is opposition her natal Sun. Saturn is very important in the relationship with Albert-Delphine and Saturn comes back in the relationship with other 'stakeholders' of this 'public affair'.

SYBILLE-ALBERT: SATURN SQUARE SATURN
The mother of Delphine is Sybille de Selys-Longchamps, who had an affair with Albert during 18 years! This longlasting relationship was a secret until October 1999 (when a biography of Queen Paola revealed it). Sybille was born 28 August 1941 with an oriental Pluto pointing at cases of life and death, sexuality, money, influence, power and politics. Sun square Uranus is one of the indications in the chart of a female for a divorce. She divorced Jacquel Boël. During the marriage she had the affair with - at the time prince - Albert.

Their charts do not match. Saturn is square Saturn, very tightly, as an indication of the problems with convenience, status, moral and parenthood. When her progressed Saturn returned to conjunct natal Saturn, her daughter Delphine was born and the conflict started.

PROGRESSED RETURN OF SATURN
In 1968, year of Delphine's birth, her progressed Sun changed sign. And so...her life changed. And the progressed Saturn return pointed at 'getting of age', growing up, becoming a parent.

IN LOVE
Her Jupiter conjunct his Sun, his Venus trine hers. And both had the progressed Moon in aspect with Venus and Jupiter (progressed and/or natal) for falling in love. Delphine says that Albert promissed her mother to abandon his wife and leave with her. (Don't 'they' always?:) But in the year of Delphine's birth transit Neptune came over the Midheaven: a scandal, secrets, etc. Nine months earlier the progressed MC of Albert changed sign, was trine Uranus and received a trine from transitting Jupiter: a positive change. Maybe he once wanted to move out of the palace...But there was Neptune...also the planet of giving up. And Neptune is on top of his solar return of 6.6.1967. The denial started.

DELPHINE AND SATURN
Delphine was born 22nd February 1968. In 2004, after a transit of Uranus conjunct her Sun and transit Saturn square her Sun, she revealed that Albert had told her that she was 'no longer his daughter' (...). So they broke up with Saturn and she was in the news with Uranus.

QUEEN PAOLA: SATURN INCONJUNCT SATURN
The wife of Albert, Paola (11 September 1937, 14:46 Forte Dei Marmi) has progressed Sun trine progressed Saturn right now. She feels recognised and stable, but at the same time transit Saturn is inconjunct her prominent placed Saturn (lowest spot of the chart). Another depth in her carreer...

ALBERT: MARS and SATURNUS
Albert has transit Saturn square Mars. Mars is important in his chart. The planet of production (in the 5th equal house) is on the IC and rises before the Sun. In his natal chart Mars is square Saturn. So now this important aspect of his life is activated again and not in his favour (Saturn!). I see Mars-Saturn in the charts of biting dogs. In the chart of a male it could point at the struggle between decendy (or law) and action/agression. The aspect is also there in the chart of famous Dutch criminal Willem Holleeder (29 May 1958).
If Mars-Jupiter symbolises happy production, then Mars-Saturn might point at the disadvantages. Look also at the birth chart of Mohammed Al Fayed, who has Saturn in a crucial position on the Descendant, quindecile (165d) Mars, so that the fysical distance with his son became his obsession. Saturn provides distance, in space or in time or in status.

The Mars-Saturn connection in the chart of Albert is also present in the synergy between father and daughter. Minor aspects connect her Mars and Saturn to his. In the combine chart you see Mars biquintile Saturn and Sun inconjunct Saturn. So much Saturn...Maybe, like with the daughters of late prince Bernhard, she will be recognised after his death. Saturn often symbolises late or ....too late.