BIRTH CHART WARREN JEFFS
and how his chart looks like that of other preacher men... 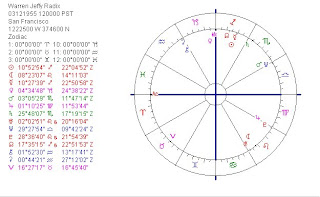 On April 6, on my Dutch blog, I wrote about 'preachermen', three Sagittarians born between December 1 and 5. Now I read about Warren Jeffs, born December 3 (...!!!) 1955 in San Francisco. Sagittarius at worst is the sign for 'giving advice' even if you did not ask for it, and always knowing better...Now he is the arrested leader of a group of mormon followers. For info: http://www.fbi.gov/wantedfutigtuves/cac/jeffs-ws.htm

Jeffs has, just like the other preachermen, Saturn prominently in his birth chart, both for being a conservative with ambition and for his fathers'influence (he is his fathers' successor). Saturn is rising before the Sun and the oriental planet.
Also notice Mars sextile Jupiter (a drive to convince others) and the ever present combination of 'faith', represented by the midpoint yod of Aries Point opposition midpoint Jupiter/Neptune.

Besides,Jeffs has Sun conjunct Mercury (for subjective ideas) and Mars square Uranus for an explosive nature.