JERRY SEINFELD,
the scary crash...
and the predictions for Taurus 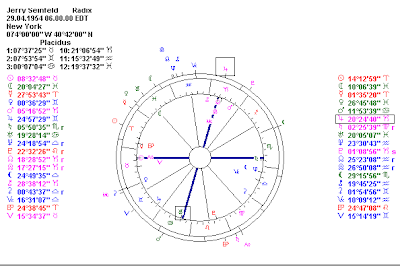 When you crash, often Uranus is involved. When you realise just how lucky you are, mostly Jupiter is there. And the combination of Jupiter and Uranus signifies: relief.

So does it surprise you that writer, comedian and famous Jerry Seinfeld (born 29th April 1954 at about 6 a.m. in NY) has Jupiter conjunct MC and opposition Uranus right now? He crashed as his old timer did not seem to have functioning brakes, but he came out unharmed. This might be a life changing experience, as his progressed Sun is changing sign and opposition transit Pluto (stating: my life is in danger!). As it happens, there are also problems with a law suit for plagiarism.

I just checked back what I predicted for Taurus and notice that it seems to fit:
"TAURUS 2008
A year of mixed feelings
It will be a mobile year for Taurus. They may travel, move, change job... And all the time they have to say goodbye to persons or places. Jupiter in Capricorn will be helpful and sends you a wise advice. But it will not just be that what makes 2008 a better year than 2007! The Taurus born between April 20 and May 11 can thank Saturn. That planet will increase the respect that they get, make their lives more stable and the people around you will appreciate and value you. The young ones will be valued by parents and teachers more than before.

The best periods to have a good vacation will be in May or August.
Famous Taurus Michael Palin (born 5th May 1943 at 11h45) must take care when travelling around this year and certainly not exaggerate anything.

My message for those born around April 21 and age about 53: Uranus might cause surprises and changes you were not waiting for, particularly in summer, when you are asked to be even more careful with motors, electricity and tensions. It might also be love that will be exciting."