THE POPE AND HIS BIRTHDAY CHART:
Travelling will be crucial... 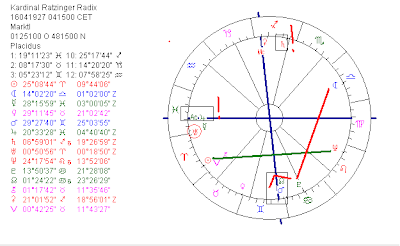 The birth chart of the Pope has Jupiter and Saturn both crucial and calling! Jupiter-Saturn is the combination of hierarcy and the call for clergy and official religious life (combination of conviction = Jupiter and carreer = Saturn). Saturn high above in the chart in Sagittarius: he is above all a conservative. Jupiter in Pisces on the Ascendant as the symbol of acting in the name of christianity. When he became a pope, transit Pluto was on the Midheaven. At the time he felt 'he hAd to' do the job.

RELIGION
Apart form the prominent Jupiter in Pisces Mars 22.5 degrees away from the midpoint of religion (Jupiter/Neptune) is pointing at his vocation.

CHARACTER
Sun in Aries trine Neptune makes him a good spiritual (Neptune) leader (Sun), just like is the case with the Daila Lama, who has Sun sextile Neptune and trine Jupiter. Moon in Libra makes him diplomatic, but the square with Pluto points at domestic changes and fanatisms that do not always improve the atmosphere. Mercury square Mars is for discussions that might get sharp. Venus square Neptune is indicating the possibility of making bad choices in life. But: who is perfect... 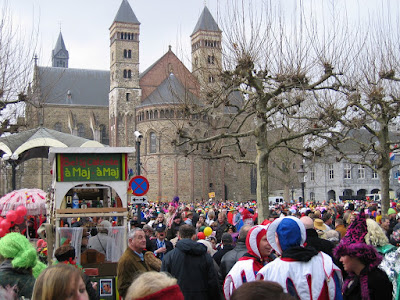 VERJAARDAGSHOROSCOOP
The pope was born on April 16 1927 at 4h15 a.m. in Marktl, Germany, so today is his official birthday.
Astrologically his birthday was on the 14th. 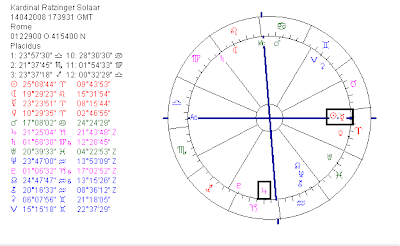 Looking at his solar return chart for this year, I notice the prominence of Mercury and Jupiter (the travel planets) on the corners of the cross. Not surprisingly he immediately crossed the ocean to the USA! Jupiter is for ínternational and Mercury for transportation.

ASTRO I.D.
In his birth chart (see image on top of this message) you see that I highlighted the 4 most prominent planets.

1. Benedicto: the blessed one
Jupiter is calling on the Ascendant in Pisces and disposing of the Midheaven: to travel and to convince at any possible level as part of the way he presents himself ...seems clear to me:)
His name is 'Benedicto', the blessed one. The ascendant (the way you present yourself) together with Jupiter (symbol of succes and being blessed)...Do you see it, too?

2. The energetic man
Mars conjunct IC and square Aries Point; for work at the background or an industrial family or for the reputation of being active. He insists on having a hugh walk in the garden every day!

3. A long life
Uranus oriental in the first house conjunct Aries Point: that is one of the advantages in a chart when you wish to get real old. Is not it funny that people spoke of him as an 'interim-pope' because of his age at the moment of his inauguration? In my book Astro I.D. I give some examples of people who got real old and had Uranus rising before the Sun (= oriental).

4. The conservative
Saturn on top, calling!: ambition, to manage, but why don't you look at it this way: PAPA!

SUCCES
40% of the possible placements are prominent and 3 out of 4 are prominent twice! I count 25 (!!!) midpoint combinations that indicate succes (in the 22.5 range) and that is a crowd. Add the prominence of Jupiter and Mars (for the amount of energy) and you see an important person stepping forward out of this drawing. .

BATCHELOT
I like to point at Mars square Uranus in the chart of the pope. This aspect (out of sign) is one of the indication that the astrologer Ram gave for not getting married or getting divorced in the charts of males. Moon in Libra in the seventh house of cooperation needs some company, but the square with Pluto in the 4th house might block the usual partnership (and maybe points at a painful experience).

RELEVANT
Popes and their charts
Mars and Uranus
About interpreting midpoints