BIRTH CHART OF MARILYN MONROE
...a material girl trying to change her world... 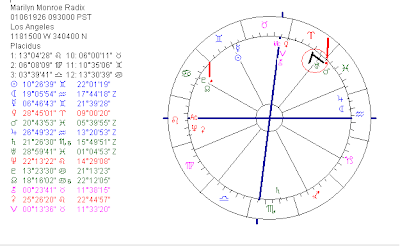 Now that a sex tape of Marilyn Monroe got out of the closet, maybe it is time to have a look at her birth chart. In my files I have 1st June 1926 at 9h30 a.m. LA and that means that she has the following Astro I.D.:

- Uranus oriental (as both Mercury and Venus are rather 'common') and 'calling' (not making major aspects in sign) in the eight house of sex, life and death AND close to Aries Point;

- Pluto (symbol of the eight house) is also 'calling', so that the combination of planets for a revolution in life (any direction:( are prominent. Pluto is semi sextile the Ascendant, so that her appearance and presentation was related to the planet of life and death, sexuality, politics and influence and...transformation.

This is the Astro I.D. of a rather shocking or very controversial person. But let us consider the fact that this is the chart of a woman...
Uranus is semi sextile Venus. It is the tightest aspect in this chart, indicating artistic talents or extra ordinary beauty. So we have a shocking (Uranus and Pluto) female (Venus). But where is the idol? I see it in Sun quintile Neptune and quindecile (105 d) Jupiter.

CIRCUMSTANCES AND CHART
This chart is not extremely 'telling'. I think we should consider her circumstances as well. She had a bad youth (Saturn in 4, square Moon: bad memories). She did not have much money and was a materialist at any possible level (no earth signs). She was rather good looking or 'thrilling' (Venus on top semi sextile Uranus and Pluto semi sextile Ascendant), with an extreme urge to change and improve her life (Uranus and Pluto). She was not extremely intelligent, she was a girl that had to manage and she did. She was born and lived close to Hollywood! What else would cross her mind!?

CHANGING PROGRESSIVE SUN SIGN
When she divorced Doharty in 1946, her progressed Sun changed sign and another way of life (Sun) started, in Hollywood.

DEATH
As always on a dying day, the 8th and the 4th, Saturn and Pluto are present. On the day that she died (August 5, 1962) Neptunus (ruler of the 8th house) was inconjunct her Sun, progressed Moon was close to inconjunct Saturn in the 4th house of life ending, and transit Jupiter ruler 5 was o.oo degree orb square progressed MC. Maybe it was just an escape, a bad moment to try to get to sleep, an accident.

MATERIAL GIRL
Marilyn did not have placements in earth signs, except for the midheaven. That caused an urge to collect material things and so she became a real material girl. A shocking material girl would not mind to make a sex video, would she? Her progressed Sun is almost trine Venus right now and will be inconjunct Uranus end of July. That means the progressed Sun hits the most important aspect in her natal chart. She loved to be 'shocking' and even after death she manages to be 'in the spotlights'.