A POSITIVE VIEW OF THE CHART OF RAUL CASTRO
who's making positive changes... 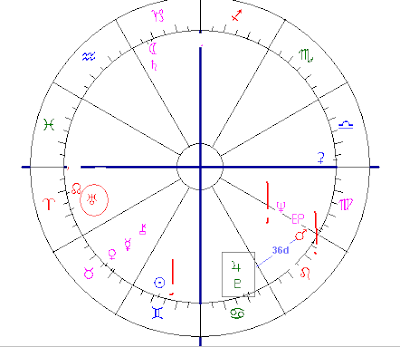 As he made a few good changes, let us look at the brigth side of Raúl Castro. Raúl Castro was born 3th June 1931 and I don't even know what time of the day. But, on that specific day the Sun was calling and when the Sun is !calling! (not making major aspects) it means that the nativity is born to be a leader, born for performing or born to 'steal the show'. A leader, in this case. And a soldier (Mars calling, too! and quindecile -75d- Sun). Mars is related to the Jupiter-Pluto conjunction by a semi quintile (36 d) and, both Jupiter and Pluto are conjunct the midpoint Sun/Mars. This is a combination for successes.

But... he is also and idealist (Neptune calling!), though - if born in the afternoon*) - first of all a man who wants to make a change (Uranus oriental). And that is exactly what he is doing in Cuba right now, in a positive way. He turned death sentences into sentences for life (except for terrorism), and is starting to introduce the free market. Nevertheless, as a brother of Fidel, he is part of the same system and he has not been chosen in a democratic way. But let us stay positive!:)

The progressed Sun is moving towards the natal Mars and to a semi square with progressed Mars. Now it is time for him to act! But there is another indication for changes and that is transit Uranus (his oriental planet) trine progressed Pluto. The combination of Uranus and Pluto is for impulse and revolution and the trine for a smooth way of sudden (Uranus) transformation (Pluto). It sounds like a new and non violent revolution in Cuba. Let us hope so.

*)Venus might be prominent enough to be the oriental planet, had he been born in the morning. Venus would be semi square Aries Point then.