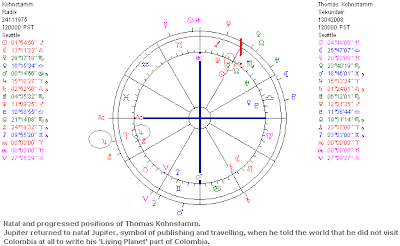 Thomas Kohnstamm, author and travel writer (Living Planet) admitted plagiarising and making up parts of his book recently. Born in November 24, 1975 in Seattle he has an oriental calling Mercury. Mercury is rising before the Sun and does not make Ptolemic (major) aspects in sign. It is not uncommon for writers to have Mercury calling.

Let us have another look at Mercury. Mercury is tightly sesqui square Jupiter and inconjunct Mars (square Aries Point). The combination of Mercury, Mars and Jupiter is a combinaton for succesfull enterprise. But the sesqui square between Mercury and Jupiter also tells us something about 'big mouth' and 'too much to be true'. A book cannot be so popular unless it was good and the readers enjoyed it. So I guess the publisher was right and what he says now is not the whole truth. He is ONE of the writers of the 'Living planet'.

Why does he reveal all this now? It might be the Jupiter return in his progressed chart. Jupiter is retrograding in his natal chart and went direct in progression. Now Jupiter got back to the starting point. Jupiter is the symbol of publishing and travelling. And I guess he wanted to make a fresh start.