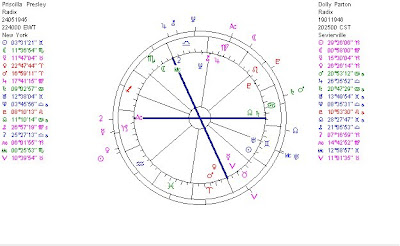 Poor Priscilla Presley...She is aging (Saturn semi square progressed Saturn) and fighting it (transit Mars conjunct progressed Saturn and transit Saturn square progressed Mars). Pluto is afflicting progressed Ascendant and MC to challenge her to make fundamental changes, and she did. She had her face done by an unlicensed surgeon (says LA Times) and it will have to be done again, better! Pluto is for surgeons when fysical changes are part of the transformation. And for times when strength, force and courage is needed.

So both felt old and needed a change. Redecorating the house would not change enough, so they redecorated their faces. Dolly will be happy soon enough (transit Venus trine progressed MC)

What do they share, except being famous and having to look good? Data:
Dolly: 19 January 1946 at 20:25 Locust Ridge TN
Priscilla: 24th May 1945 22h40 NY
They share an aspect between Venus and Jupiter (square for Dolly, biquintile for Priscilla). And they share a quindecile (obsession) aspect between Venus and Pluto (165 degrees for Dolly, 105 for Priscilla). Of course their beauty and charm is important for their succes in life and 'who wants to be beautiful, must suffer'. Still, there is a slight difference between a movie star (Presley) and a singer (Parton, also in the charts. Parton has a 'calling'Mercury for communicating and Uranus on top for causing upheavel all the time (like in December, when the audience in Holland found out that she play backed several numbers of her show: transit Uranus!). Priscilla on the other hand has Venus, Mars and Jupiter calling. I look at the unaspected Venus and see that Venus is also oriental (rising before the Sun AND prominent). That makes beauty a real issue...
Geplaatst door Astromarkt op 3:35 PM