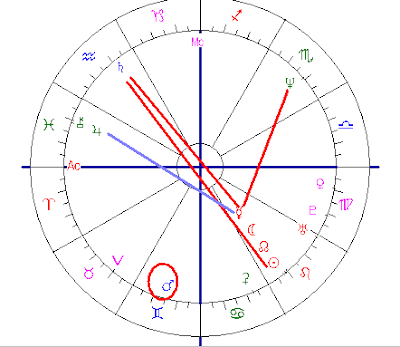 Wesley Snipes (actor) has been convicted for not paying enough taxes with some intriguing transits with his progressed chart: Transit Saturn conjunct Uranus, Transit Uranus semisquare Saturn and opposition Sun, transit Jupiter trine Sun. Maybe he was lucky and he could have got more years in prison? But what still remains is the Sun-Saturn-Uranus combination.

In his natal chart there is also a Sun-Saturn-Uranus combination. Sun opposition Saturn in Aquarius - ruled by Uranus - (and Sun is 22.5 degrees away from Uranus). The Saturn-Uranus combination is symbolic for the theme of limited freedom and resisting limitations. Sun-Saturn aspects related to the 12th house are frequent in the charts of inmates. Since his HOB is unknown I cannot tell you if this is so this time. But the opposition of Sun and Saturn is very tight and there is more.

It might be true , as Stripes claims, that he is naive nad an artist who does not know about finances. He has Sun square Neptune. He also has a list of legal problems (see Wikipedia). Look at Mercury inconjunct Jupiter and square Neptune...It is a perfect combination for an actor, but in business it is for 'big mouth' and 'miscommunications'. The square with Saturn adds narrow mindedness. You might read all this as 'disadvantages (Saturn) of telling big lies (Mercury-Jupiter-Neptune)'. Another tight aspect in his chart is Saturn inconjunct Pluto. That is a sign for hard confrontations.

Three years in prison is a lot...